The Australian rider leads the final round of the 2016 FIM Cross Country Rallies World Championship. 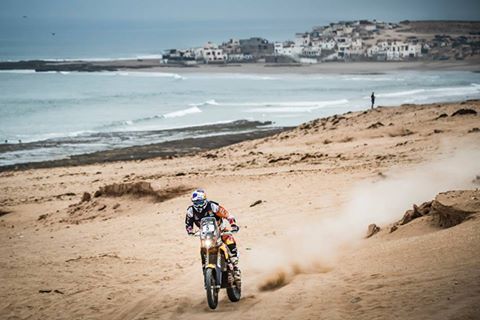 Following victory in Sunday’s seven kilometre super special, Price elected to start in 11th place for the opening stage. Passing on navigation to the leading riders, Price timed his run to perfection, storming home on his KTM 450 Rally to claim victory in the 240km stage.

“Stage one was good and there was a couple of tricky bits and the dust made it a bit difficult when we caught some riders in front,” said Price. “But we got through well and I only made a couple of small errors with the navigation. But I think it was more to do with the dust and trying to keep my eyes on the road instead of looking at the road book.”

Price acknowledged that the second stage will prove more challenging.

“It’s going to be difficult and we’re going to make sure we look after the bike and the tires, and on day three we can charge a bit harder,” he added. “We’ll just take it nice and easy and make sure we finish in one piece and start day three feeling healthy and with a good bike.”

“Today was pretty good,” Sunderland shared. “I started in 12th and that was my decision after the prologue. I had Toby in front of me and I knew I would have a bit of clean air because he would be pushing hard,” Sunderland said. “We both caught the Yamaha rider (de Soultrait) after only a few kilometers and I caught his dust a bit and made a small navigational error. When you have to stop for a speed zone it breaks your rhythm. It can be 3-4 km at 30 km/h, so that side of it was tough.”

Australia’s Rod Faggotter made his debut for the Yamalube Yamaha off Road Factory Team placing 17th.

“It’s been a learning day. I got to lead out right from the start, which made things a lot more interesting,” Faggotter said. “My navigation was good and just before the end of the first special stage Hélder caught up with me and I let him pass. Right after the start of the second special Botturi passed me as well. Despite a small fall just before the end I crossed the line without any major problems. Overall, I’m learning a lot racing among the best riders in the world. As for tomorrow, I’m looking forward to being the cat and not the mousse in the game for the top.”

Stage two of the Morocco Rally involves a 554km route, 291 of which are timed specials.

I’ve been swapping between the same two pairs regularly for the past two and a half years and they’ve still got life in them. […]

A revised format has been set for the events third year. […]

Video: Onboard At San Diego – Seely, Millsaps and Oldenburg

22/01/2016 Ashley Diterlizzi NEWS Comments Off on Video: Onboard At San Diego – Seely, Millsaps and Oldenburg