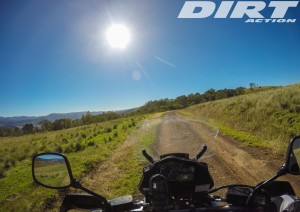 A lot has changed in racing in the last 200 issues of DIRT ACTION, some for the better and some for the worse. There has also been situations where next to nothing has changed over the same period of time. That’s the evolution of our sport. Recently, a bunch of us old-timers sat around and chatted about motocross and supercross in the ‘80s and ‘90s and how much different the landscape is from today. The ‘80s and ‘90s were a very successful period and a lot of the people involved then are still directly involved with the sport now in many different ways. Some of us are extremely lucky to earn a living from what is still a hobby.

My early racing days when I was a senior were spent in a train of HiAce vans travelling to a race, any race, around Australia. If there was a race on, you busted your nut to get there and we were doing 35 events per year. You and two mates loaded up a van to the roof with a bike each, a tool box, a tent, a couple of chairs and a fuel can and away you went. And it was some of the best times riders of that generation would have had. Every rider did it, regardless of the team or support you got. Glenn Bell or Craig Dack might have been in the car in front of you. There were no flights, no airports and no rental cars, just 15 HiAce vans barreling down a highway, usually with someone’s bare arse hanging out the window, chain lube being sprayed over following vans and a heap of tape from a cassette wrapping itself around the fleet. Those were good times and something the current generation misses. None of us raced for money back then; we raced from passion and the friendships formed last a lifetime.

There was the supercross series in North Queensland, which always turned into a month-long party in the middle of the year. Events in Mackay, Townsville, Cairns and Rockhampton would see everyone travel there together, stay at the same motels and hang out. Press day was always Thursday at 11am so from then until Saturday night when the main event finished, it was all business. Then it was a race to the nearest night club for the party to start. And it wasn’t pills and illegal drugs, it was a few beers and a good time.

I remember doing a 5am nude ride in the sand dunes of WA on the way home from Manjimup. For some strange reason, a heap of us pulled into the sand dunes, unloaded bikes and starting riding at 5am. By the time the rangers got there, most of us were nude apart from helmets and boots. It was pretty odd standing there in a line up when the tourists starting rolling in.

I recall the aggression on the track but it rarely spilling over into the pits. In fact, most of the time, the rider you cleaned out, or whom cleaned you out, had to get in the same car as you when you travelled home. And there were some huge take outs. McFarlane put Byrne into a dam at Tivoli — and they were living together at the time. Micky Cook and McFarlane got into a T-boning match at Gosford, of which neither rider finished the race but were team mates the following year. You stood your ground on the track and then laughed it off when you returned. We were a supercross nation racing up to 29 supercross events per year, all with prize money. No one was getting rich but you could earn money week to week and keep yourself on the road and going from race to race. Promoters would assist in motel bills around the event and when that couldn’t happen, everyone would stay at a fellow rider’s house.

As we were discussing all this I looked out over the Bathurst Showgrounds. The lights were on but the track was dark and full of shadows. It was cold and wet and it suddenly felt like it was 1989 again as we had raced an event there that was exactly the same all those years ago. Ronnie McFarlane was standing to my right — still with the same amount of hair as 1989 (none) — Brad McAlpine was cracking some odd joke that takes 10 minutes to understand and Graham “checkers” Stewart was going crazy on the finish line as Gary Been walked past holding a clip board. Some things never change…

About Scott Bishop 49 Articles
Scott Bishop is the most experienced dirt bike test dummy in Australia and perhaps the world.

Matt Bernard was granted access to Jay Marmont’s practice track as he prepared for round three of the Australian Supercross Championships. […]