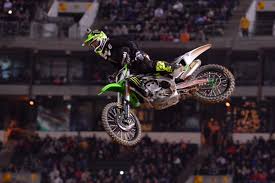 Factory Metal Works/Honda’s Vince Friese led the field of 450SX Class riders through turn one to win the Nuclear Cowboyz® Holeshot Award with Toyota/Yamaha/JGRMX’s Justin Brayton on his back wheel. On the opening lap, Villopoto and Discount Tire Racing/TwoTwoMotorsports’ Chad Reed took over the number one and two positions respectively.

Yoshimura Suzuki’s James Stewart started a charge on Lap 4 to take over fourth place, and on Lap 7, he secured third place. Stewart made one last pass on Reed for second place, where he would finish just 4.2 seconds behind Villopoto. Reed finished third.

“The track was really one-lined tonight,” said Stewart. “I had to take some chances out there to move through the field.”

“It feels good to be up here tonight,” said Villopoto from the podium. “We have put in a lot of work at the test track, and I have a great team behind me and a great bike under me. I hope I can carry this momentum into Anaheim next weekend.”

Villopoto moved into the points lead and Reed moved into second place, seven points behind Villopoto.

Monster Energy/Pro Circuit/Kawasaki’s Dean Wilson edged out his teammate Justin Hill for the Nuclear CowboyzHoleshot Award in the Western Regional 250SX Class Main Event. Hill quickly moved into the lead and by the end of the opening lap, Anderson moved into second place with Wilson assuming third place.

Hill and Anderson traded places on lap six, and while the two jockeyed for position in a corner, Wilson passed Anderson for second place and a few turns later, he passed Hill for the lead. Anderson tracked down Hill on the following lap to moved into second place.

Anderson – for the third time this season – made a pass on the last lap to move into the lead and eventual win. Wilson finished a season-best second place and Hill finished a career-best third place.

“I have been working very hard, and everything was coming together tonight, but my bike stalled,” said Wilson. “I have always had the speed, but I have yet to put it together.”

“I can’t believe I keep pulling these off; three wins in four races is huge,” said Anderson. “I hope to come away with the number-one plate at the end of the season. I wanted to be in attack mode tonight, but I also wanted to keep it on two wheels.”

Troy Lee Designs/Lucas Oil/Honda’s Cole Seeley came into tonight’s race with the points lead but dropped to second place as Anderson now moved into the number-one position in season standings and has a six-point lead.

Monster Energy Supercross heads to Anaheim next Saturday, February 1 for the third and final race at Angel Stadium.

Salvini Leads The Way On Day One In Portugal […]