Australian legend Chad Reed has finally revealed that he will join Yamaha for the AMA Supercross season. 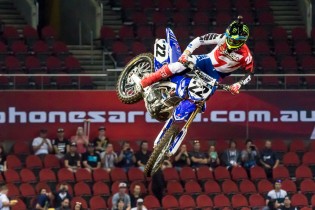 The re-introduction of Yamaha’s factory Supercross team will be officially named Monster Energy/360fly/Chaparral/Yamaha factory racing. Spearheading the program will be none other than the familiar #22.

Months of speculation have surrounded Reed’s decision and many rumours hinted that a return to Yamaha was on the cards. Murmurs got louder as Reed mounted a YZ450F for both the recent Monster Energy Cup and AUS-X Open.

At 33 years of age Reed has won two AMA Supercross Championships for Yamaha back in 2004 and 2008. Not to let age get in the way Chad is still confident in his abilities and will no doubt be hunting down a third title.

“There’s no place like home right?” Chad commented. “With Yamaha and the whole crew here, it definitely feels that way.

“I have amazing history with the Yamaha bLU cRU, but really, it’s about looking forward and what we can continue to build together that motivates and excites me the most. I’m thankful for all my sponsors, especially Yamaha, Monster Energy, 360fly, Chaparral Motorsports, and Valli Construction for bringing back the Yamaha factory Supercross team for 2016! It’s something special for 22, and for all Yamaha bLU cRU fans!

“One thing that hasn’t faded with age is my passion for racing and being on the gate with the best riders in the world. I’ve never felt more determined and excited to be a part of it.”

“All of us at Yamaha are proud to re-introduce our factory Supercross team,” McCarty stated. “We’ve had a long-standing relationship with Monster Energy in road racing, and we’re thrilled to be able to expand our successful partnership to now include Supercross.

“We also welcome back old friends Chaparral Motorsports and Valli Construction, and we welcome new partner 360fly. Of course, we’re also very excited to have Chad Reed back with us again as one of our Yamaha bLU cRU riders.”

Davey Motorsports KTM rider Lewis Woods has stunned the field to take out round four of the SX2 Australian Supercross Championship. […]

Video: Onboard With Malcolm Stewart

24/10/2016 Ashley Diterlizzi NEWS, VIDEOS Comments Off on Video: Onboard With Malcolm Stewart

The Yoshimura Suzuki rider will miss the final three rounds as he shifts focus to the 2016 outdoors season. […]