After an impressive opening round Ferris reveals his goals for the season. 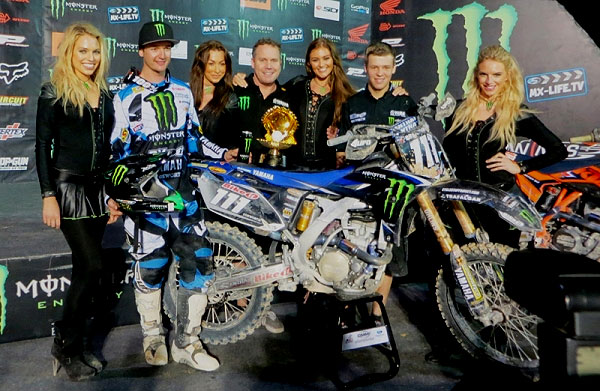 “Obviously it’s good to be on the podium and the season could not have started in a better way. In the first moto I got a decent start and I really pushed to stay with the front group but I couldn’t do it. In between motos we spoke with the team and we agreed to change gearing to try and improved the set-up and it worked. I’m sure my lap-times were better in the Superfinal and I didn’t have to push the limit. I was second and there was not much more I could do so I just brought it home. I didn’t think too much about the Superfinal before we came here but I’m glad we got in the gate before the 450s so they couldn’t close us down too much at the start. I’ve raced quite a bit of supercross in Australia so the lights were OK for me. The hardest thing was trying to see areas of traction in the dirt but the lighting was good. I hope when I get a bit more comfortable I can try to get closer to Jeffrey’s speed but the goal right now is to get on the podium every weekend. I was excited out there, battling all those 450s and I’m well aware that Andrew was the last Aussie rider up here and he also did it with Steve [Dixon, Team Manager] so that was nice. I think the Yamaha is definitely the best bike I have ridden for any team that I’ve represented. The guys put in a lot of work to make it the best and that gives me a lot of confidence.”

The American rider won both disciplines at the inaugural event. […]

#teampirelli promotion is on now. […]