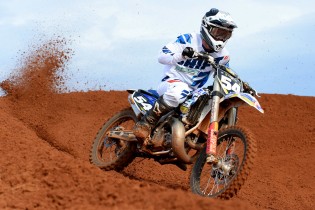 SD3 Husqvarna rider Luke Arbon has taken the round win in the Motul MX2 class at the fourth round of the 2014 Monster Energy MX Nationals at Murray Bridge in South Australia. In front of over 3,500 spectators, Arbon was the standout performer in the MX2 class, backing up a second place finish in the opening moto of the day with a race win in the second moto.

In the opening moto, Lamont streaked the field to take the holeshot and move comfortably into the lead. It was an ominous sign for the Kiwi who was looking for a good round to make a move on series leader Clout – and it was just the start he was after. Lamont was followed at the first corner by Arbon and Tunetech Racing KTM Australia’s Kale Makeham, and the trio finished the race in the same positions.

The only challenge to the order looked like coming from Clout who managed to pass Makeham into third in the second half of the moto, before he lost control and slipped back into fourth place, where he eventually finished. Harrison found himself in 12th position by the end of the second lap, but worked his way through the field nicely to finish the race in fifth place.

In the second race of the day disaster struck early for Lamont who went down at the first turn, and could only manage an 11th place in the moto. Caleb Ward rode his Wayne Leonard KTM into the holeshot, and managed to stay in first place for some time before being passed by eventual race winner Arbon. Arbon had been battling with Clout back in third and fourth before stepping it up to get into the lead and consolidate his brilliant round win. With Lamont having drifted down the field, Clout had an opportunity to peg back some important series points that he gave up to the kiwi in the opening race. He managed to pass Ward into second position before an unfortunate crash saw him drop back to fourth, and he eventually finished the race in fifth. Similarly to his charge in the first race, Harrison ended race two in third place after earlier finding himself back as far as 13th. Hamish Harwood (CMR Redbull KTM) finished the race in fourth.

In the overall championship standings, Lamont, Harrison and Arbon all managed to close the gap on series leader Clout, who holds a 12 point lead over Lamont. Harwood is a further seven points behind with Harrison and Makeham rounding out the top-five.

Results: All the Moto X Events from X Games

02/07/2012 Damien Ashenhurst NEWS Comments Off on Results: All the Moto X Events from X Games

Milner Finishes Championship Winning Season on a High At AORC

CDR Yamaha off Road racer Daniel Milner finished his 2013 AORC campaign in sensational fashion taking the double round victory at rounds 11 and 12 held at Dungog, NSW over the weekend. […]