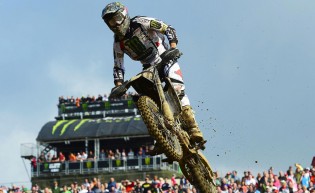 Dean Ferris and Christophe Charlier both steered their YZ250F‘s to chequered flags at Matterley Basin for the British Grand Prix and the sixteenth round of seventeen in the FIM Motocross World Championship. 25,000 spectators in southern England watched the Australian and Corsican dominate both 35 minute and 2 lap motos but moments of misfortune kept both Monster Energy Yamaha protagonists away from the final top three.

The vast and scenic circuit was lashed by English rain through the morning of raceday before the skies cleared and the slick mud became drier and rougher. The layout was still flowing and bruising with several big jumps testing the mettle of the GP stars.
Ferris attacked the course with relish in the opening chase. He profited from a determined holeshot and defended a lead of several seconds for the entire duration from Jake Nicholls. In the second sprint Ferris was looking comfortable for his second Grand Prix overall victory in a row until one small mistake led to a crash and a damaged fuel tank frustratingly ended his day.

Charlier was also at the extremes of race fortunes. The YZ250FM pilot slipped off his bike twice in the first outing and even tweaked his left hand. Ignoring the pain ‘23’ was an unparalleled force in the second affair and sprinted free to celebrate his second triumph of the year. Charlier’s 18-3 would mean 5th overall and classify him as top Yamaha man for the day.

It was a great home Grand Prix for Mel Pocock. The 2012 European Champion was nursing damage to the ligament in his right knee as a consequence of his poor luck in the Belgian round one week earlier. Mel made his customary good starts however and immediately got to grips with the track. He worked to 6th and 9th and his ranking of 6th in MX2 represented a personal and career best. Maxime Desprey was nursing a sore back and struggling to cope with the many big bumps and heavy landings from the hefty Matterley jumps. The MX2 rookie – who celebrated a European Championship race victory at the same venue one year earlier – was 12th and 20th for 20th overall.

Matterley was also the scene of the penultimate round of the European EMX125 contest where Nicolas Dercourt was again one of the main pace-setters on his YZ125. The teenager fought through to second place overall, a comfortable distance ahead of German Henry Jacobi. The youngster is now in-line for the number two plate in 2013 and has a ten point lead over Calvin Vlaanderen with one race and just 25 points left to win.

As part of the same hectic meeting Kiara Fontanesi took a step closer to her second FIM Women’s world Championship on the YRRD-kitted YZ250F by winning one moto and eventually finishing second overall. The rapid Italian has aced seven out of eight races so far this season and has two rounds – in Czech Republic and Slovakia – left to wrap up the series and reconfirm her position as the fastest female on the mud.

Matterley had plenty going on and Sunday afternoon also saw a press conference given by the Dixon-led Monster Energy Yamaha crew in which they presented exciting Brit Max Anstie as their rider for the next two seasons. The 20 year old will line-up on the 2014 YZ250F for the ’14 series provisionally set to start again next March in Qatar.
The current motocross racing campaign is winding down to a close. The Grand Prix of Benelux in the rough sand of Lierop will take place on September 8th and draw the curtain on the FIM Motocross World Championship before Ferris and Charlier then start to think about their roles in the 67th Motocross of Nations at the end of the same month.

Dean Ferris
“The first moto was good. I got my first holeshot and just controlled the race and rode smart. The track really suited me because it was so technical and rutty. In moto two Butron was just a roadblock; I’ve got nothing more to say. I was trying everything to pass and getting off the line a lot. I crashed because I had my head-down from getting filled-in and the next thing I knew I was cartwheeling. I broke the tank, the bike wouldn’t fire and there was fuel everywhere. That was that and at the moment I am very disappointed that the DNF cost me fourth in the championship also. I am so happy in one respect in that the bike is working so sweetly now and it is a shame we are close to the end of the season because I could have had more points on the table…but you live and learn.”

Christophe Charlier
“In the first race I started in eighth but was making my way back until I crashed with Ferrandis. I picked up the bike but fell again and after that it was hard to pass the riders because I had pain in my hand. I was eighteenth and kept going because I wanted whatever points I could get. In the second moto my start was good and the bike was so strong. I’m happy with the race but it is a bit of a shame about the Grand Prix overall.”

Mel Pocock
“I’m really happy with that. I think it was my two best rides all year. I have been waiting for a deep, rutty, technical track like this one for a long time. I had one really good start and one not so great but I made the best of it. I had to strap my knee because I’ve damaged the medial ligament so I’m happy with sixth overall and my best result this year. At one point yesterday I wasn’t sure if I’d race. Also a big thanks to the team because I think at the eleventh hour they found something suspect with the engine and had to quickly change everything before the second race. We only just made it.”

Maxime Desprey
“Hard weekend for me. During the week I had a contraction in my back so when I was on the bike I didn’t feel so good here. I took 12th in the first moto but had no strength or power in the second. I just tried to finish where I could and now I want to train in the sand for the last GP.”

Kiara Fontanesi
“It was not a bad meeting for the championship but I’m disappointed. I could not ride how I wanted in the second moto at all and was very frustrated. Natalie Kane was strong today but I know I could have done much better. My hands were almost locked into a position after that second race because of the arm-pump and I needed help to get my gloves off. I don’t think I have ever had a moto like that. Anyway, two more to go and I hope we can win the title in style.”

Watch the highlights from the AMA Supercross Phoenix 450. […]