Hear from the stars of our sport. 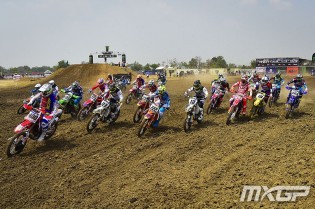 Romain Febvre (1st MXGP): “I’m happy to win the first moto, and the second was easier, because after the second corner I was in the lead, and I could make a good gap, and ride safely to the finish. In the first moto I had a really long battle with Tony Cairoli, and you get the stones and the dust in your face, and here its really difficult to pass. I was frustrated because I couldn’t pass him, and even when I did I had to slow down a bit and take a break, because I was really tired. I’m really happy to take the red plate, but you know it’s still a really long season ahead. It’s really nice to have it, but there are still 16 rounds to go.”

Tim Gajser (2nd MXGP): “I think now the toughest race of the year is behind us and I’m really happy with our weekend. In the second moto I didn’t have the best start because Toni stalled in the corner in front of me and I almost hit his bike, but to come back to finish fifth was still good. I’m really pleased with a second podium and I want to thank all the guys on the team and at HRC because the bike is just amazing, and to my Dad because we worked so hard together over the winter and now all that work is paying off. It’s been a good weekend. Not quite like Qatar, but I was feeling good and happy on the bike. It’s another good result and two races and two podiums is a great way to start the season.”

Jeremy van Horebeek (3rd MXGP): “Its good to start the season in fourth, and I am going to keep building from here. It’s an even better start to the season than 2014, so I’m looking forward to the rest of the year. I always feel miserable after the heat, I don’t see how other guys can do it on days like this. I think you can see the difference also on our faces, because I don’t think I worked any less hard than anybody else. I can’t resist the heat, I don’t know why. I do everything to prepare for it, so I’m glad to walk away with a podium.”

Evgeny Bobryshev (4th MXGP): “For me until now it was the hardest race. The weather and the track were both very tough. I couldn’t get well with the track and I was struggling in the corners and couldn’t flow my speed. The track was less rutted today than yesterday though, so the guys at the track and the organisers made a good job with the work they did overnight. The first race was ok and I stayed in fourth so I’m happy with that. But still I struggled a little and couldn’t push myself too hard. I had a bad start in the second race and had to come back from ninth but when I got behind Simpson I couldn’t push hard enough to pass him. Compared to one year ago when we were last in Thailand I am different though. I handle the heat better and changed my style a bit, working a lot over winter, and I think that people can see that too. It was a hot weekend for us, but also for my mechanics who had some heavy work this weekend so I’d like to thank them too for the great job they’re doing.”

Tony Cairoli (5th MXGP): “Here in Thailand all went well, yesterday, after suffering a bit in the timed practice, I managed to make a good start and to qualify in third place. Today in the first moto I ended with a fine second place, fighting for the win throughout the race, after being in the lead for more than half of the time. For me that’s was the most important, because it helps me find a good feeling with the top positions. In race two I made a second perfect start but this time a technical problem slowed me down, extinguishing the bike halfway through the first corner. I restarted last and from that moment for the first two laps the bike has got some trouble, then things went slowly better. This is a track where starting ahead is key and unfortunately things like that you cannot control, however, we bring home a good experience, that we will need it later and important points in the standings. Now we have two weeks off, which we will use to prepare well for the Valkenswaard round, where we hope to bring home a good result.”

Shaun Simpson (6th MXGP): “Coming off a solid performance last week, I would say we were feeling pretty positive about this weekend. The track looked nice to begin with; I’d say it actually rode quite well yesterday, contrary to what some people said. I was slightly disappointed with the first moto and was definitely disappointed with my starts overall. They were terrible all weekend, so that is something that we need to improve on. The second race was obviously great. I managed to sneak around the first two turns, get into second or third position and then basically just did what I could do. I rode around at my own little pace and that was enough to secure me sixth, sixth overall and sixth in the championship. I think it was another solid weekend that we can build on. We are only a few points from the guys in front and still there or thereabouts. Overall I’m pretty pleased with it.”

Kevin Strijbos (8th MXGP): “I don’t know what to say any more. I feel sorry for the team who have worked so hard because we have changed the bike set-up so much. Nothing seemed to work. In the first race I had so much arm-pump that I could not hold on and it was the same in the second race. I’m not sure what is wrong. The winter went so well. I felt good and people were telling me that I was riding better than ever but it is not showing on the track. I have to believe in myself but once I’m on the track it is a mess. We have some time now before Valkenswaard to find a solution.”

Ben Townley (9th MXGP): “I blew it. I made a mistake that caught me out of the blue. It was on the last roller and I was in the wrong gear. I was caught out by how slick it was and got ejected. I was up ready to salvage something but the radiator was damaged and I was lucky to make it back to the pits. In the second moto obviously the result was much better but it was tough. Someone jumped the gate beside me so I was late off the line. I started in sixth and worked my way up; I think I had a bit more spark than the other boys. In the end I gave everything I had and I had to talk myself through to the end. It was a mission. Overall I’m not concerned about the podium but the 18 points that I threw away. It’s really disappointing. We are still working on the bike quite a lot, and have made progress every session since starting in Qatar, but there is still work to do on the engine and suspension especially. Onto the next one.”

Tommy Searle (10th MXGP): I made a sixth in the first race, which was good considering I was sick when I came here to the track. In the second race I was racing ninth and was expecting to move forward, but the fuel inlet pipe came out from the tank and I got fuel in my face; I knew that if I didn’t stop the bike would have run out of fuel. So I had to stop and put in back on; I lost five places but overall I guess I have to be happy to go back to Europe safe, even though it would have been better to get another top ten result. It was hot, but in the second race I was so scared with the fuel that I didn’t push too hard. It was a difficult day.”

Jeffrey Herlings (1st MX2): “I tried to overtake a rider on the tabletop. Obviously I hit the jump pretty hard and luckily I didn’t go over the handlebars. Now I’m really looking forward to Valkenswaard. I always dreamed of becoming world champion in my home country and that’s never happened but getting my 50th win is something special. Only 3-4 riders have managed that so it would be amazing.”

Jeremy Seewer (2nd MX2): “Last year was not my best race here in Thailand! This year we did a lot better and all the work we did paid off. I’m really happy. We need to work on my starts a little bit because we missed out both times here but we have made so many changes to my bike this winter we have made big steps. I think we will make it work. So far it has been great working with Stefan because there is a new spirit in the team. It is helping me and is very positive. I want to keep consistent now, avoid crashing and keep in the top five. I’m not too concerned about the championship yet because we are still so early in the season. It doesn’t matter where you are at the start but more at the end.”

Aleksandr Tonkov (3rd MX2): “I’m really proud of this first podium of the year, and I hope it won’t be our last. I had a a pretty good start, but then I made a small mistake and flooded my bike. After that I did everything I could to catch up, and I had no idea even what position I was in, I just tried to race all the way to the finish. I don’t really take the heat very well, and it was even hotter today, my head was spinning at the end. But motocross is the same for everybody. I have to thank Wilvo Standing Construct Yamaha team for their great work to help me this weekend, and also my brother who is my training mechanic, and we worked all winter, so its nice when hard work pays off.”

Pauls Jonass (5th MX2): “I haven’t had so much bike time the last two weeks and yesterday my thumb was quite painful but today its okay. I think I could have made two top fives if I hadn’t crashed in the first race in the second turn, so it’s not so bad. The season is very long and now we have a break and I want to have more bike time. I think that will help. I like the sand at Valkenswaard and sand races are my favorites.”

Alvin Östlund (8th MX2): “For the first race I was in eighth position but I lapped another rider and tried to come in front of him in the corner too fast and crashed. I was so angry about that because my clutch was up and my handlebar was a little bent, and I lost three positions with three laps to go. In the second race my start was really good, second I think, so I just tried to stay on the waves and finish well, because its difficult in the heat. I finished seventh which is really good for me, and eighth overall, so I’m really happy –

I have a new iPhone and, putting it bluntly, the battery is rubbish. […]