We pinned down Michael Byrne for a quick catch up right before he boarded his flight out to AUS for this weekends Moto Master Class Course. He’s had a busy year working alongside Chad Reed including a recent trip to Europe giving Chad a hand at a couple of MXGP’s. 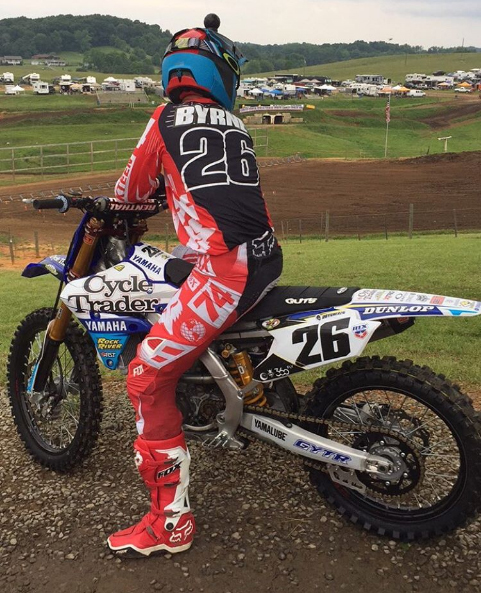 You’ve just returned from Europe after working with Chad during his MXGP’s, how was the trip?

It was a fun trip over there; the results weren’t as good on paper as he was probably riding though. Chad had just a little nagging hand issue after the first week which just made it that much tougher. He over jumped a jump in practice at the second GP which didn’t help it either. The results don’t show how well he was riding that’s for sure but all in all it was a great experience. It’s been 15 years since he was in Europe so to be involved when he returned was cool. There were some road trips and we spent time in England and also in Italy which was nice.

What is your official role with Chad?

I guess you would call it training partner/property manager. I look after the tracks and the property; make sure they are kept in good shape and ready to roll when they are needed. I also go to all the races with Chad and help out there, just watching and helping with his riding anyway I can, going through video and giving any feedback on lines or even what other riders may be doing on the track, things Chad can’t see. This year back at home it’s more about watching Chad during the motos and giving feedback to help things improve rather than just riding with him. Really just trying to improve any little things and details that we can.

How did the Supercross season end up from your point of view?

The year went really well all things considered. The whole deal with Yamaha was only signed one or two days before the first race. So really it all started on the back foot with testing and developing the bike. We realised we had a really good setup for hard pack tracks but struggled when we got to the softer surfaces to start with. All in all a couple of podiums and top five finish in championship was pretty solid. It was a really good learning year for the team and it will be much stronger and established heading into next year.

You’re about to get on a plane and head out to Aus now right?

Yeah, they’re literally calling me to board now. I’m on my way out for another Moto Master Class course with Motodevelopment, this year we are hitting Rockhampton in Central Queensland which is cool for me. It’s the area I’m from and it will be great to see the local talent and how the CQ riders are going. I did plenty of racing around that region when I was younger so I’m really looking forward to a great weekend.

To finish up we hear you’re racing Loretta’s this year too?

Yep, right after Master Class I have about two weeks before I race Loretta’s; I’m in for the +25 class. I’m really looking forward to it, I never had a chance to race it when I was younger and I hear all the cool stories about racing Loretta’s so I wanted to give it a shot. I’m just trying to get as much riding in as I can before it so I’m as prepared as I can be, I’ve had a busy few months leading up to it but it’s going well. I’m looking forward to cutting plenty of laps at Rocky this weekend so it should be good.

Like most of us, I watched, enjoyed and sometimes disliked the 2012 London Olympic Games which was on TV 24 hours a day for two weeks straight. […]

Hear from the riders following round ten of the Lucas Oil pro Motocross Championship. […]

Hear from the stars following round 15 of the Motocross World Championship. […]