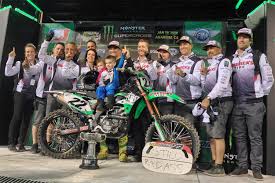 While leading on Lap 6, Dungey crashed and dropped to fifth place, giving the lead to Yoshimura Suzuki’s James Stewart. Villopoto bounced back to pass Roczen for the number-two position and set his sights on Stewart. On Lap 14, Villopoto attempted to pass Stewart and crashed, losing several positions.

The crash by Villopoto allowed Roczen to move into second place and Reed to third place. The next lap, Reed passed Roczen for second and two laps later, he passed Stewart for the lead and eventual win. Stewart finished second and Roczen finished third.

“I had 41 of these [wins] before tonight, and they came a hell of a lot easier than this one,” said Reed. “I am so proud and could not have done this without the hard work from my Discount Tire team. We all worked so hard in the off season, and it paid off in a big way tonight. I am so pumped.”

“The track was tight tonight,” said Stewart. “We had two veterans finish one and two tonight, so that was great. Overall, I am proud of my race tonight.”

This was Reed’s first win since January 21, 2012 in Los Angeles’ Dodger Stadium and the 42nd of his career. It was also his first win in Anaheim since February 2, 2008 when he won all three races at the venue.

Roczen reclaimed the points lead with Villopoto trailing by a point. Reed moved into third place.

Anderson passed Webb on Lap 8 to secure second place, 5.7 seconds behind Seely. Seely held on for the win, followed by Anderson and Webb. Tonight was the first career podium finish for Webb, who is a rookie this year.

“It was an awesome night for our team,” said Seely. “We have done so much testing before and during the season and spent countless hours at the track, so it is nice to have the hard work pay off. I had some breathing room on the last lap, which was nice. We are going to keep the momentum going headed into next week.”

The win was Seely’s fourth of his career and he trails Anderson in season standings by three points.

Monster Energy Supercross heads to Oakland’s O.co Coliseum next Saturday, January 25, for the fourth race of the 2014 season.

The All Japan Motocross Champion has joined the team’s pre season training program in Spain. […]

[cmsmasters_row][cmsmasters_column data_width=”1/1″][cmsmasters_text] Ask anyone who’s not totally into dirtbikes what they know about the sport and they’ll most likely have heard of Chad Reed. While Australia has had a proud history of riders heading to […]