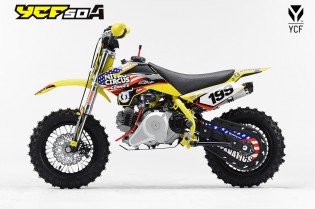 Race fans pre-purchasing tickets via the www.e-ticket.com.au web site to the GoPro round four of the 2015 Australian Supercross Championship presented by Penrite Oils at Jimboomba X Stadium on November 21 have a number of chances to win big thanks to special promotions being staged via the event’s Facebook page.

J2 Supercross organisers have previously announced on the ‘Jimboomba X Stadium’ Facebook page details of the Ultimate VIP Fan Experience give-away, which will be drawn at 7pm this Friday, November 13.

The Ultimate VIP Fan Experience will see one lucky J2 Supercross race-goer treated to an exclusive tour of the leading race team transporters and a special meet and greet photo shoot and autograph session with their favourite rider, as well scoring an autographed race jersey and a swag of prizes.

A package of four Stadium seat tickets to the J2 Supercross event is also up for grabs on the ‘Jimboomba X Stadium’ Facebook page, with the winner drawn at 6pm this Friday, November 13.

And now YCF Australia, an official partner of the 2015 Australian Supercross Championship and Australian distributor of YCF Fun Bikes, is getting in on the ‘Jimboomba X Stadium’ Facebook fun, by providing a limited-edition Nitro Circus YCF50A Pastrana mini bike (valued at $1,690) that will be won by one lucky J2 Supercross race-goer.

Entry into the YCF50A Pastrana mini bike give-away is simple, and is detailed on the ‘Jimboomba X Stadium’ Facebook page.

The YCF50A Pastrana mini bike winner will be drawn on the night (November 21) at the J2 Supercross at Jimboomba X Stadium and the winner must be at the event to collect their prize.

“We are excited to be involved with the 2015 Australian Supercross Championship and to be supporting Supercross racing at the highest level,” explains Patrick Lowry from YCF Australia.

“YCF has now been in Australia for one year and these events really give us an opportunity to show our customers we are serious about establishing our brand for the long-term.

“It’s also a great opportunity showcase our range to race-goers, which includes a variety of models suitable for the whole family, from 50cc kids bikes through to 190cc MX bikes.”

YCF Australia is currently also staging a retail promotion, where buyers of any YCF 50 model between now and Christmas get a free set of YCF training wheels, cap, T-shirt, sticker sheet and grip donuts. The kit is valued at $230 and for more details and to find your nearest YCF Fun Bike dealer, check out the www.ycf-motorcycles.com.au web site.

For more details of all the J2 Supercross Facebook give-aways, go to the ‘Jimboomba X Stadium’ Facebook page.

To pre-purchase tickets to the J2 Supercross at Jimboomba X Stadium on November 21, go to the www.e-ticket.com.au web site.

10/09/2015 Ashley Diterlizzi NEWS Comments Off on Press: Honda Funbike offers ahead of Christmas

Spring is here and it’s time to get the kids out to enjoy Australia’s wide open spaces and fresh air, with a little help from Honda’s new Fun Times campaign. […]

KTM rider Luke Styke will have surgery in the next two days on a ruptured Achilles tendon he suffered during the AUS-X Open. […]

The most pint-size of mini bike riders are set to taste the ultimate on-track experience with the announcement of the Cobra Cup being staged at the Queensland rounds of the 2015 Australian Supercross Championship. […]