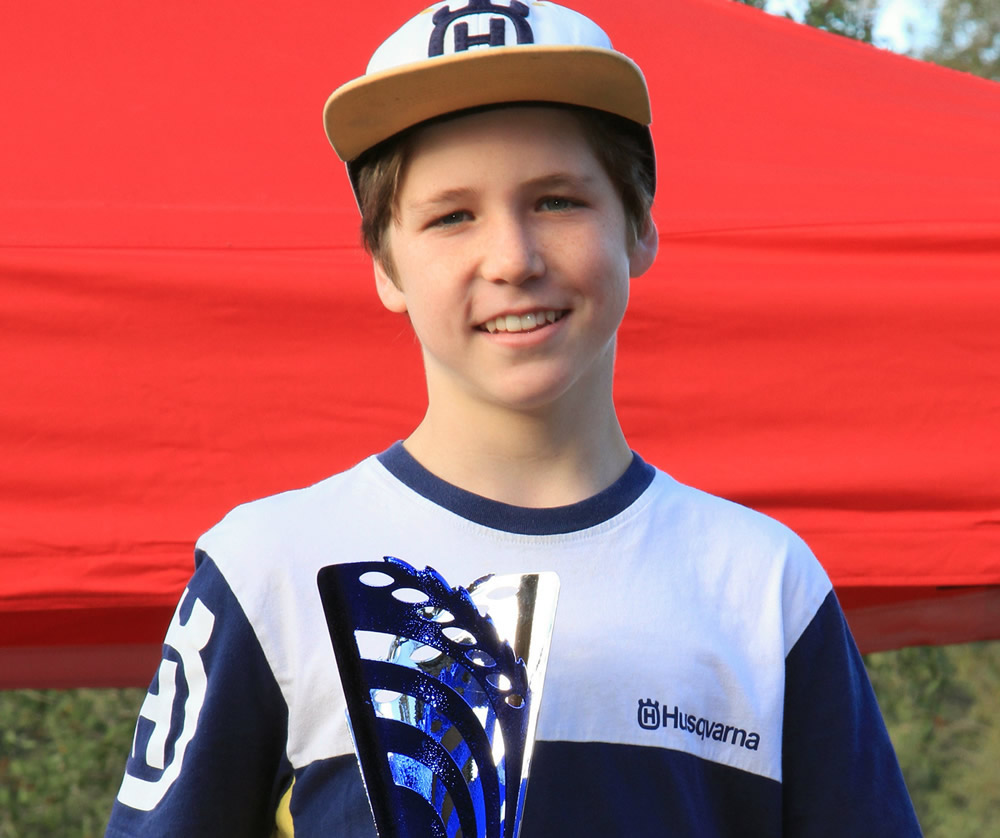 The exciting Singleton-based 14-year-old won state titles on both his FC250 and TC125 Husqvarnas, clinching the Combined, 250cc and 125cc categories.

The result was made all the more impressive by the fact that Van Eerde, who qualified at the top of all three classes, found himself struggling with starts on the day and was forced to pass to earn the lead in each case.

Hopping aboard his two-stroke TC125, Van Eerde won the 150cc 2T class from Cyshan Weale by 0.726, with Bailey Spencer third.

Van Eerde’s last-corner victory in the 250cc 4st class was the tightest result of the day for the Husqvarna pilot, with a margin of 0.432 over Max Whale, with Jack Hyde third.

“It’s definitely been my best meeting all year,” Van Eerde shared. “My bikes felt the best they have yet, getting drive where I needed to – I loved them. I had to come from behind in all my races, so I feel pretty good about that. I was getting pretty bad starts all weekend – some weekends I get good starts and others not. Sometimes I’d be like eighth into the corner or if I was lucky I might be as high as second.

“In the 125 final I got to first by the end of the second lap, and had a good battle for the first two laps. In the combined final I was 7th or 8th in the first corner, and came through the pack battling with Max Whale, Mack Childs and all that, it was good fun. I got to first on the last lap.

“In the 250 final, I got to second in the first corner, behind Max Whale, and he was leading me the whole race, then in the last corner I dived up the inside than on it. I got a good run out of the corner and he went a bit wide, we were like going into the last corner looking at each other, I out-braked him a bit but he tried to cut up the inside, but I just held it flat and came out first. We have good fun racing each other, it’s like that every weekend.”

Melbourne rider Max Berry rode his Moto GC-backed TC85 to third place in the 85-150cc 11-13 years class, while Hayden Nelson rode his Husqvarna to third in the 65cc 7-9 years.

“To win one state title on the day is a big effort, to win three – the kid’s talent is just incredible,” Caslick said. “Somersby’s not a difficult track to pass on, but when you’ve got other kids in the field that are as quick as what they are, he just found something above them. His racecraft is exceptional, the things that the kid sees, and having the ability that he has got to put it all together and come through from bad gates. Most riders when they get a bad gate, drop their bundle, but he’s just lifted. He is also maturing in his strength, he still little, but he’s not tiny anymore. And I think that’s helping him to muscle the bike around.”

Spunk up ya computer with one of these mad Finke Desert Race wallpapers. […]