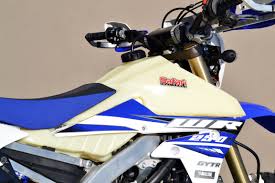 Designed to closely replicate the standard bike’s ergonomics, the new tank replaces the standard air box cover but retains the standard radiator shrouds. Air flow to the radiators is not affected.

The tank is available in Clear or Grey finishes and is supplied with mounting hardware and instructions.

Part numbers and RRP as follows:

The 15 litre fuel tank is now available at authorised Yamaha dealers and via the YShop online store: http://yshop.yamaha-motor.com.au

Hunter Ruled out of Supercross Finale

Serco Yamaha’s Wade Hunter will miss the AUS-X Open with a broken foot. […]

2016 will see a combined effort from Honda Australia and Motologic to run both on and off-road racing teams. […]

The JDR/KTM Factory Racing team kicked off the 2012 MX Nationals, Australian Motocross Championsip, at Conondale in Queensland on Sunday, 1 April. […]