Active8 Yamaha’s Josh Green and Beau Ralston gave the all-new 2016 Yamaha WR450F the perfect Australian race debut with a 1-2 finish at the opening round of the Queensland Enduro Championships. 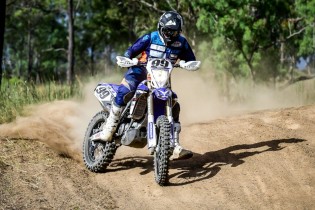 Green, who made the transition back to the E2 class for 2016, took the round win over the two-day event in dusty conditions. His win was 28 seconds clear of Beau Ralston, who competed on a big bore WR-F, in a team 1-2 and a dominant day for the WR.

The duo split special test wins on day one taking four wins each in a tight days racing but it was Green who stormed home on day two with six special test wins from the eight contested to take an impressive first up win for the WR450F.

“It was good to get a race under my belt and get the season underway,” Green explains. “We have done some testing over the off season on the new bike but there is nothing like trying it out in race conditions and we were able to do that over the weekend.

“The bike handled the conditions perfectly and apart from me crashing it a couple of times, it was a super smooth run. I thought stepping back up to the E2 class might take me some time to get used to the extra power but I felt right at home and we were able to put a good weekend together and finish with a team 1-2,” Green ends.

Ralston made a strong start to his 2016 campaign and took the challenge right up to Green. He won the opening two special tests of day one and made Green work super hard for his win. Over the two days and 90 minutes of racing, only 28 seconds separated the pair in what were hot and dusty conditions.

“The weekend went well and the big WR did a great job,” Ralston laughs. “There is a lot of power to control with an E3 capacity bike but because of the smooth delivery, it doesn’t feel that way out on the trial. It’s a really easy bike to ride.

“The team have done a great job preparing the bike and its great fun to ride so I look forward to racing it throughout the 2016 season,” Ralston stated.

The team are now in full swing with final preparations being made for the start of the Australian Off Road Championship which begins on March 19 -20 but team manager, AJ Roberts, has come away from the opening hit out on the new bikes happy with their state of play.

“We wanted to get an event in before the opening round of the AORC just to be sure everything was on track and so far, the team and the riders are really pleased with how the bikes performed. With little more than some personalization to suit each rider, we have been able to take the WR into a race environment and have success and just as importantly, durability.

It was a good start to the year for the team and the new WR and hopefully a sign of things to come in 2016.”