The 51 Fifty Energy Yamaha rider suffered the break during a crash in the 250 LCQ at Oakland. 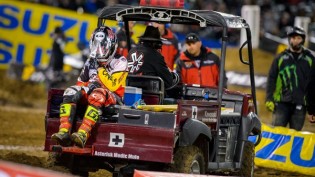 Bell will undergo surgery this week to repair the damage after being bucked off his bike going through the whoops section. It has been a troubled start to 2016 for the rider who already missed the San Diego Supercross after failing to recover in time from a midweek practice crash.

“In the LCQ, after getting knocked down right off the start I knew making the main was doubtful but I wanted to pass as many guys as possible,” he said. “There was no way I was going to quit or not put in 100 percent and then I made a mistake and that was it.”

The recovery time for Bell is still unknown serving a massive blow to the 51 Fifty Energy Yamaha team. They will now field a one man line-up with Australian hopeful Hayden Mellross at the forefront.

Barreda Penalised in Dakar Shake Up

Overnight leader Joan Barreda was penalised for speeding during stage four, falling to fourth place despite crossing the line in first. […]

How trick are these Samco silicone hoses? […]