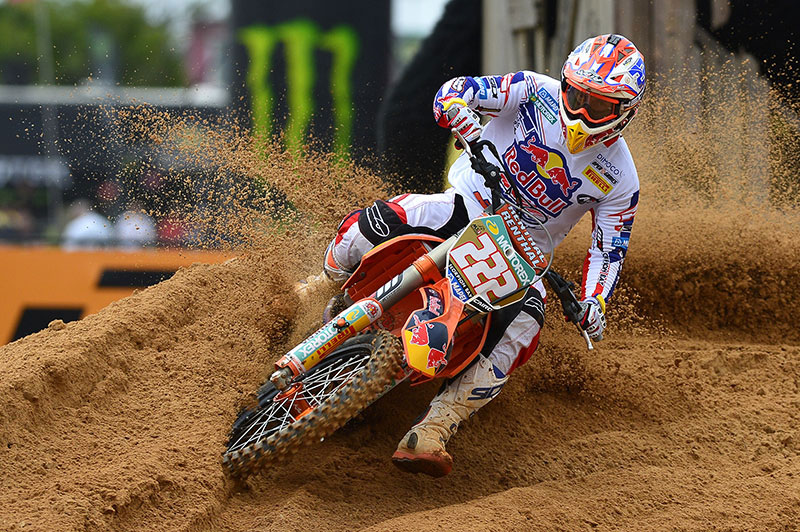 BETO CARRERO (Brazil), 19 May 2013 – Once again the Grand Prix of Brazil was a great success thanks to the outstanding facilities of Beto Carrero, the enthusiastic 45000 fans that cheered for the MXGP riders during the whole event, as well as the great racing in both MX1 and MX2 classes and of course in the Super Final. In the end there was just a little bit of drizzle at the start of the first race of MX1, so the track conditions were perfect to host all the heats of the Grand Prix of Brazil.

Antonio Cairoli won the Super Final, as well as the MX1 Grand Prix and he dedicated his 58th GP victory to his friend Marco Simoncelli who passed away in 2011. Clement Desalle was third in the Super Final and second overall in the Grand Prix, whereas his teammate Kevin Strijbos obtained the third overall position thanks to his second place in the Super Final.

Jeffrey Herlings won the first race but he was the second best MX2 rider in the Super Final behind Jose Butrón. Herlings won the Grand Prix, Butrón was second and Jordi Tixier completed the MX2 top three.

MX1 Race 1
Red Bull KTM Factory Racing’s Antonio Cairoli obtained the GET Athena holeshot award, as he was the first one to reach the first corner in the MX1 race 1. The Italian succeeded in pulling away in the first laps and he dominated the heat until the chequered flag. At the end of the race Cairoli admitted that he had enjoyed a lot racing the Beto Carrero track, as it was very technical and it suits very much his riding style.

Honda World Motocross’ Max Nagl managed to move from his initial fifth position to the second final place. The German rider won yesterday’s qualifying race and he was very satisfied today for having been able to overtake several riders and finish in a well deserved second place in the first moto.

Rockstar Energy Suzuki World’s Clement Desalle did not have such a good start in the first race and when he was overtaken by Nagl in the first laps of the heat the Belgian could not pass him back. Desalle admitted that by the end of the race he tried to attack the German but he struggled to find the good lines and he had to settle down with the third place.

Kawasaki Racing Team’s Gautier Paulin did not have a good start in the first race and he was down in the eleventh position in the first corners of the race. However, the French rider gave it all and he crossed the finish line in the fourth place.

His teammate Jeremy Van Horebeek also had a solid first race; the Belgian rider was eighth at the start, but he managed to overtake Kevin Strijbos, Ken De Dycker and David Philippaerts and he finished fifth.

Kevin Strijbos did not have a good start and could not find a good rhythm, so in the end he ended sixth. Instead, David Philippaerts had an excellent start and rode second during the first four laps of the race. The Italian lost a couple of positions with Nagl and Desalle, and while he was riding a very consistent race in the fourth position, he had a problem with the tear off and he was only able to finish seventh in the race.

Tommy Searle had a really good start in third, but he made a mistake and dropped down to ninth place. In the end the British rider finished eighth and Ken De Dycker and Joel Roelants completed the top ten.

Davide Guarneri had to enter the last chance in order to be qualified for the SuperFinal because he was forced to pull out from Race 1 after having a big crash in the beginning of the race.

MX2 Race 1
Red Bull KTM Factory Racing’s Jeffrey Herlings struggled once again with his start in the first race, but he did an incredible recovery and he made the crowd go crazy lap after lap. The Dutch was 12th at the start and even if most of the riders said that it was very difficult to pass, Herlings managed to win the first race by almost twelve seconds.

Standing Construct KTM’s Glenn Coldenhoff started second behind Alexander Tonkov, who had taken the Get Athena Holeshot, but the Dutch rider overtook the Russian after the first three laps and Coldenhoff took the lead of the race. Coldenhoff was feeling really good, but he could not keep his compatriot Herlings at the back, so Coldenhoff had to settle down with the second position.

Wilvo Nestaan JM Racing KTM’s Jake Nicholls had a very consistent first race and he managed to finish third. The British rider started third and on lap four he overtook Tonkov and moved up to second. However, Herlings was coming really fast from behind and Nicholls dropped one position.

Monster Energy Yamaha’s Mel Pocock obtained his best result of the season by finishing fifth in the first race. The British rider had a really good start and he was fourth in the first laps, but Herlings overtook him and he dropped down to fifth. The British rider managed to pass Tonkov by the middle of the heat but Pocock was overtaken by Tixier in the last minutes of the race and he had to settle down with the fifth position.

Jose Butrón did not have a very good start in the first race and he struggled to find a good rhythm. After racing eighth most of the heat, the Spanish rider started feeling better and he overtook a couple of riders and he crossed the finish line sixth.

Super Final
The Grand Prix of Brazil hosted the last Super Final of 2013 and it was slightly different from the ones in Qatar and Thailand. The MX1 and MX2 riders lined up for the Super Final in their respective championship standings up to the tenth gate pick, i.e. Cairoli, Herlings, Paulin, Tixier and so on. However, Herlings decided not to be next to Cairoli and he chose the first gate from the inside.

ICE1Racing’s Rui Gonçalves took the holeshot of the Super Final, but after the first few corners Rockstar Energy Suzuki’s Kevin Strijbos overtook him and the Belgian led the race until there were three laps to go. Red Bull KTM Factory Racing’s Antonio Cairoli had a good start but he almost crashed in the opening lap so he went down in fourth; the Italian tried to overtake the front riders as soon as possible, but when he was second Strijbos had already opened a big gap and Cairoli started getting some arm pump. In the end Strijbos got a little bit tired so Cairoli could close the gap and with three laps to go the Italian took the lead.

Rockstar Energy Suzuki’s Clement Desalle admitted that he did not feel really comfortable today, but he managed to ride a consistent moto in third. Kawasaki Racing Team’s Gautier Paulin was fifth in the first lap of the Super Final, but after four laps he managed to overtake Ken De Dycker and he kept the fourth position until the chequered flag, position that gave him the overall fourth place of the Grand Prix of Brazil.

Red Bull KTM Factory Racing’s Ken De Dycker struggled in the first race but he managed to have a good start in the Super Final and he rode a consistent race in fifth. However, the Belgian rider was only seventh overall in the Grand Prix. Honda World Motocross’ Max Nagl was sixth in the Super Final, so he obtained his best result of the season by finishing fourth overall in the Grand Prix.

Rui Gonçalves could not keep his initial second position and crossed the finish line seventh, followed by Jeremy Van Horebeek and Tommy Searle. Jose Butrón was tenth and he was the best MX2 rider in the Super Final. Jeffrey Herlings finished thirteenth and Jordi Tixier fifteenth.

Take a virtual lap around Toronto, host to round ten of the AMA Monster Energy Supercross series. […]

The Suzuki rider has edged out defending champ Kirk Gibbs to win his second title. […]