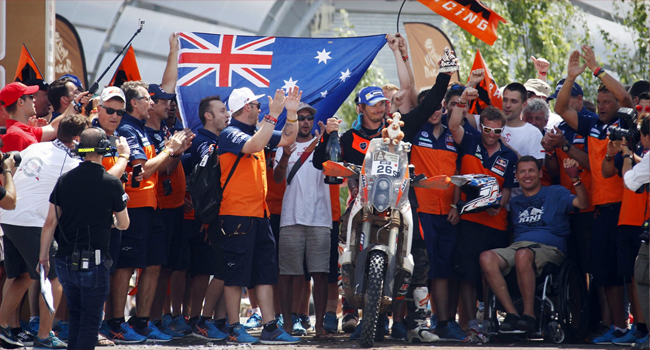 KTM Australia’s Off-Road Racing Team Manager Ben Grabham has praised Toby Price’s performance in the 2015 Dakar Rally as a display of consistency and strategic intelligence, the likes of which he’s never before seen from a Dakar rookie.

Grabham, one of Australia’s most decorated off-road racers of all time, rode in the last two Dakars, achieving a debut finish before crashing out last year while well placed. But he reckons Price’s effort was even more special than it looked.

Price sealed a fairytale debut in the world’s biggest off-road race when he secured third place in the 9000+ kilometre, 14-day epic, which culminated in Buenos Aires.

The final stage of the race ended in unexpected fashion, as heavy rain prompted organisers to call a halt after just two checkpoints, deeming the wet conditions to be too dangerous.

Late-charging KTM-mounted Slovakians Ivan Jakes and Stefan Svitko finished one and two in the final day’s standings, with yesterday’s winner Price taking his third podium finish of the event.

Price and his KTM 450 Rally finished the event 6 minutes 21 seconds behind Goncalves, putting the icing on a spectacular Dakar debut which included nine top-five finishes and a stage win in yesterday’s mammoth 1024-kilometre journey.

Price will now return to Australia and have a week off before the start of the Australian Enduro-X Nationals in Brisbane, on February 7.
For more information on KTM motorcycles visit www.ktm.com.au or www.facebook.com/KTMAustralia

Toby Price: “Well, what a ride that was! One of the toughest and badass races I’ve ever done. Just getting to the finish line is a win for everybody but I somehow managed third overall and a spot on the podium with these two legends. I’m lost for words but once again, thank you to everyone for the support worldwide and most of all ???#‎Australia. I’m glad I could get this one for myself and Australia. A huge congratulations to Marc Coma on his fifth ‎Dakar Rally win. You are a true legend and badass my friend!”

Ben Grabham KTM Off-Road Racing Team Manager: “I knew that barring anything crazy overnight he was going to be standing on that podium today, so as soon as I woke up this morning I rang to congratulate him. Because I’ve done Dakar I know what an amazing ride he’s had to be able to do that straight up. I never doubted for a minute that he could beat all those guys speed-wise, but I haven’t seen too many people go and show that kind of consistency and keep themselves out of trouble like he did. He’s got two guys ahead of him with a lot of experience, but by gee he beat a lot of other guys that have wads of experience compared to him. He proved he can use his brain and think a lot on the bike as well.
He’s back in a few days, and he wanted to come and do Deep Well this weekend, but I know that his brain will need a good rest, then it will be straight into the complete opposite of what he’s been doing – enduro-cross on the smaller 350. But if anybody can cross over, that’s Toby, as he proved!”

Serco Motorsports and Yamaha Australia are proud to announce the retention of Luke Clout for the 2014 racing season for their factory MX2 team. […]

There are few times in life when the stars align, and for Link International, Williams Event Management and the MX Nationals, in 2016 that is exactly what has happened. […]