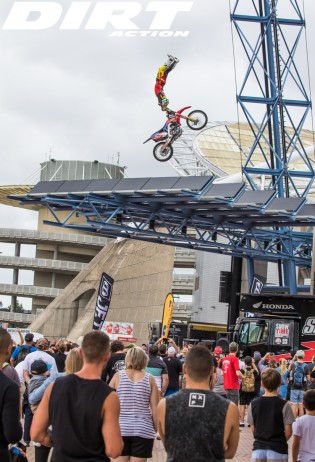 The Australian FMX Grand Prix will coincide with the opening round of the Formula One World Championship. The size of the event will provide a great atmosphere for the riders to show off their skills in front of a packed house.

Three separate disciplines will be held including FMX, speed and style and best whip. The riders will have the choice to choose their events be that just one or all three.

A number of international superstars are expected to make the trip down under headlined by four –times X Games gold medallist Mike Mason.

“I’ve always loved coming to Australia. When the opportunity came up to compete at this first ever event in Melbourne, there was no way I was going to miss it!

“To be competing alongside the Formula One Australian Grand Prix is a massive opportunity for the sport – so definitely have to thank everyone involved”, commented Mason.

2012 Red Bull X-Fighters champion Levi Sherwood will also make the short trip across the Tasman. The kiwi rider is a big gun of the FMX world who only knows one way…big!

Libor Podmo from the Czecjh Republic, Kyle Demelo from Canada and James Carter from the USA will also compete.

Domestically, Jackson Strong will bring the heat fresh of his AUS-X open dominance. With an impressive kit of tricks Strong will be joined by Aussie veteran Cam Sinclair. The former X Games gold medallist has had some time away from the sport but will be fully firing come March.

The Aussies will also be represented by king of the whip Jarryd McNeil, Cheyne Boyd and Ryan Brown.

FOR THE LOVE OF DIRT: MEGA PHOTO GALLERY

20/03/2015 Damien Ashenhurst NEWS Comments Off on FOR THE LOVE OF DIRT: MEGA PHOTO GALLERY

Check out our mega photo gallery: For the love of dirt. […]

CDR Yamaha’s Dan Reardon has won back to back rounds following another strong performance in the Australian Supercross Championship. […]

Team HRC Gear up for Qatar

HRC will field a two rider lineup in the MXGP with Gautier Paulin and Evgeny Bobryshev. […]