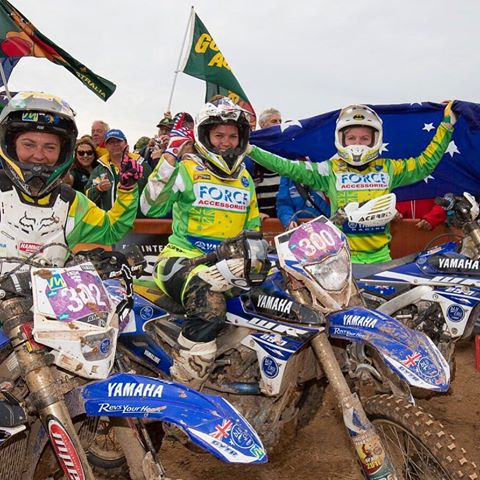 Tayla Jones, Jemma Wilson and Jessica Gardiner are literally on top of the world after successfully defending their world title in Spain. Heading into the final stage with a three and a half minute lead the girls knew that conservative and smart riding should see them through.

Jones pulled away to lead the females home for the last time ahead of Germany’s Maria Franke and USA’s Tarah Gieger. Fellow Aussies Gardiner and Wilson finished in seventh and ninth places respectively.

The results were enough for Team Australia to claim overall victory ahead of rivals Spain and Germany. In the individual ranks Germany’s Franke claimed outright honours ahead of Spain’s Laia Sanz in second and Aussie Tayla Jones in third. Jemma Wilson finished fifth and Jessica Gardiner in 17th capping of a huge six days for our girls.

“Words don’t explain just how much this means to us,” told Robert. “We’ve been trying and trying for so long but finally this has been our week. This win is massive.”

Great Britain ended the contest in second overall with the Czech Republic rounding out the podium.  Team Australia were never in the fight after losing two riders in the opening two days.

“I’ve been so stressed the last few days, this is a huge deal for me and for the USA,” exclaimed Taylor Robert.

“I kept trying to tell myself that everything would work out, but I know anything can happen during the final motos. This is my sixth ISDE and it feels so good to have won with team USA and also to have got the overall individual result. My final moto went well, I got a good start and quickly worked my way into the lead. Then half an hour after my race was over was the worst because I was waiting for a phone call to tell me how Daniel Sanders got on, to find out if I’d got the overall. The team’s been great, we’ve been getting closer and closer to this year-on-year. This one’s for Kurt Caselli.”

In the junior class, Team Sweden scored victory thanks to Albin Elowson, Jesper Borjesson and Mickael Perrson. Teams USA and Italy finished second and third after clinching strong results in each stage. The Aussie trio of Tom McCormack, Jack Simpson and Nic Tomlinson finished in a very respectable sixth place.

Ralston Out For Redemption

Beau Ralston will look to end the AORC season on a high this weekend in Monkerai. […]

The Active8 Yamaha team have mounted a consistent couple of rounds as the Australian Off Road Championships continued in NSW last weekend. By Hayden Gregory The three pronged rider attack of Beau Ralston, Josh Green […]

Longreach Yamaha dealer, Rod Faggotter, finished in an amazing 14th place in the motorcycle division on board his Yamaha YZ450F, in one of the world most gruelling off road adventure events, the Dakar Rally held in South America. […]