Bell will join the team for the 2016 Monster Energy Supercross season. 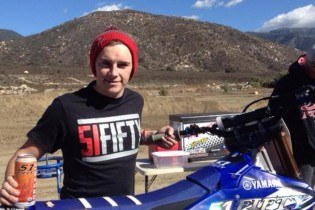 Zach Bell is the marquee signing for the 51FIFTY Yamaha team in its fifth year of competition. He is set to contest the West Region alongside our very own Australian rider Hayden Melross.

Zach won the 2012 AMA Horizon Award before going on to represent team GEICO Honda in which injuries hampered the start to his professional career. Bell spent two years with the team before signing with Rockstar Energy Husqvarna last season. Unfortunately a head injury meant he was only able to contest one round of the Lucas Oil Pro Motocross series.

“I’m fired up to be part of the 51FIFTY team,” says Bell. “The program is strong and from the first day I rode the practice bike, I adapted right away to the YZ. As a team we have the same realistic goals and, personally, it’s great having confidence in the bike, team staff, and total program. I feel this can be a break-out year for me and just ready to keep moving forward.”

51FIFTY team manager Craig Monty is thrilled to have a rider like Zach Bell on board for 2016.

“It’s a solid move for 51FIFTY as we continue to grow entering our fifth year as a team,” explained Monty. “Zach certainly has the speed, anyone who watches him knows that, and we can’t wait for Anaheim 1.”

Husqvarna have just announced the 701 ENDURO as an addition to their model line up. The bike is a dual purpose mid size adventure bike due for release late this year. […]

CDR Yamaha’s Daniel Milner rode to his third Outright win in a row today at round eight of the Yamaha Australian Off-Road Championship (AORC) held at Coonawarra, South Australia. […]