Gibbs creeps up on Moss after Murray Bridge win 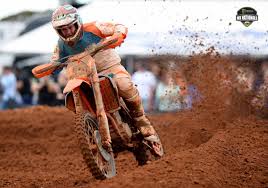 KTM Motocross Race Team’s Kirk Gibbs has claimed the overall honours in the Monster MX1 class at the fourth round of the 2014 Monster Energy MX Nationals at Murray Bridge.

Gibbs backed up some strong words during the week about his claim as a championship contender with a wonderful performance in the South Australian sand.

The KTM pilot finished the day with a race win in the second moto which, when paired with his opening moto result of fourth place, was enough to give him a three-point round win ahead of CDR Yamaha rider Billy Mackenzie. Mackenzie was extremely consistent with two third-placings from his two races to finish ahead of National Pump Monster Energy Kawasaki’s Jake Moss (sixth and second from his two races).

After winning the Superpole hotlap for the round and qualifying fastest, Monea was looking to continue his run of hot form.  However it was Rhys Carter (Team Motul Suzuki) who took the holeshot in the opening moto – a lead that lasted seconds as Matt Moss charged to the front at the next turn. By the end of the opening lap with things settling down, it was Matt Moss in the lead from Cody Cooper (Penrite Honda Racing), with Monea in third. Local favourite Gibbs settled further back into seventh place further down the field, just behind Jake Moss. It was a tense and hard fought moto, and before long Monea managed to pass Matt Moss – a lead that he did not relinquish for the remainder of the race.

Moss had problems throughout the moto, and was slowly picked off by his rivals – first Cooper, who ended the race in second and then Mackenzie, who battled his way through the field onto the podium. Moss and Gibbs had a fierce battle for fourth place over the last two turns of the race, with Gibbs narrowly edging out the reigning champ.

While the first moto was full of mouth-watering action, the second saw little movement in race order once the opening lap was completed. Jake Moss steamed to the front of the field taking the holeshot, while disaster struck for Cooper who went down at the opening turn ending his day prematurely. It didn’t take long for Gibbs to stamp his authority on the race – into the lead by the end of the second lap and comfortably riding away to a memorable victory. As Gibbs took the lead, Jake Moss was relegated to second (where he eventually finished) with Mackenzie back in third place.

Mackenzie rode the race in third to finish on the podium, while privateer Jacob Wright fought hard to finish in an impressive fourth, with DPH Yamaha’s Kade Mosig earning fifth place in the race. Matt Moss rounded off a disappointing day at Murray Bridge finishing in sixth place in the second moto.

In the overall championship standings, Moss retained the outright lead but has had that whittled down to just 13 points from Gibbs. Monea is a further 22 points behind in third, with Jake Moss and Mackenzie rounding out the top-five.

A Tough Day for the Husqvarna Crew in Shepparton

Husqvarna’s young Factory Support racers were forced to cop some bitter racing luck on the chin as this year’s MX Nationals passed through Shepparton in Victoria for its eighth round. […]

Youthstream has announced the provisional list of Officially Approved Teams (OAT) and their riders that will take part in the 2016 FIM Motocross World Championship. The final 2016 OAT list will be published by the end of January. […]

With Round 2 of the Motul MX Nationals just days away, local fans now have the chance to meet some of the biggest names in Australian Motocross, with teams and riders making selected appearances this […]