LIEROP (The Netherlands), 8 September 2013 – Lierop woke up this morning with a lot of rain, and although it stopped before the races started, all the MX1 and MX2 riders mentioned how difficult and demanding the track was today. However, these conditions were the perfect ones for Shaun Simpson to win the first Grand Prix of his career. In MX2 Jeffrey Herlings showed once again why he is called the king of the sand by winning the two heats and finishing the season with another Grand Prix victory. 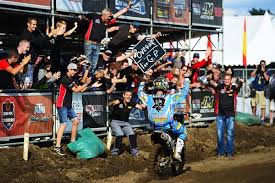 MX1
JK SKS Gebeen Yamaha’s Shaun Simpson was one of the main protagonists of the weekend and all the MXGP paddock was cheering for the British rider when he crossed the finish line as the winner of the Grand Prix. Simpson rode two strong races and he admitted that today’s racing conditions were really favourable for him because he loves the sand and he does not mind riding with wet conditions as the ones today in Lierop. Simpson had really good starts in both heats, but while in the first one he rode with the front group most of the time and crossed the finish line second, in the final one he had to battle with Strijbos, Bobryshev, Desalle and in the last laps with De Dycker to finish third. With this overall victory Shaun Simpson has become the last MX1 GP winner in the history – in 2014 it will be called MXGP – and he explained that he feels very proud for that, as well as also for being the first British rider on the first step of the MX1 podium after Billy Mackenzie’s victory back in 2007.

The second overall position of the Dutch Grand Prix was for Rockstar Energy Suzuki World’s Kevin Strijbos thanks to his 2-2 result. The Belgian rider was a bit disappointed today because his goal for the weekend was moving up to the fourth position of the championship, which he did, but also winning the Grand Prix and he finished just one point behind Simpson. He admitted that he could not find the good feeling with the track today, especially in the second moto, and this is why he could not keep a good rhythm to ride for the victory in both races.

Red Bull KTM Factory Racing’s Antonio Cairoli was also a bit disappointed with his third overall position, because he wanted to close the championship with an overall victory. The Italian dominated the second race from beginning to end, but in the first one a problem on his back wheel forced him to finish fourth. Cairoli admitted that he rode safe the first minutes of the first heat because he was not sure how his body would react riding the 450cc, but after twenty minutes he started feeling confident and he got a good rhythm to catch Simpson. However, the Italian had already felt that there was a strange noise on his back wheel, and he was about to overtake Simpson for the lead, he lost the back wheel and crashed. Cairoli had to slow down but he was still able to finish the race fourth.

MX2
Red Bull KTM Factory Racing’s Jeffrey Herlings received the FIM Gold Medal today in front of his home crowd and he was also able to go home with another overall victory after winning both heats. The Dutch rider led the first race from beginning to end, but in the second one he crashed during the fifth lap and he dropped down one position. Herlings admitted that he hit his injured shoulder and he struggled a lot to recuperate his rhythm, but towards the end of the race he started feeling better and he succeeded to overtake Glenn Coldenhoff and win the race.

Rockstar Bud Racing Kawasaki’s Dylan Ferrandis was back on the podium this weekend after finishing second and third in today’s races. The French rider had already had a good qualifying race in fourth yesterday and today he was focused in racing two consistent motos with no mistakes and he was very satisfied with his third overall position.