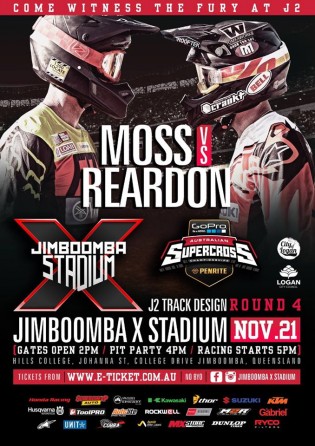 After three sensational opening rounds, the GoPro round four of the 2015 Australian Supercross Championship presented by Penrite Oils returns to Jimboomba X Stadium, Queensland, on November 21 and promises to maintain the rage as SX1 heavyweights Dan Reardon and Matt Moss continue their clash for the most prestigious crown in Australian Supercross racing.

Reardon, who races for the CDR Yamaha team, and reigning two-time Supercross champion Moss, who headlines the Team Motul Suzuki squad, have gone at it hammer and tong all series long, Moss winning the series opener at Bathurst, NSW, and Reardon firing back to win rounds two at Jimboomba, Queensland, and three at Adelaide, South Australia.

Last weekend’s third round at Adelaide Showground was an all-time classic, which saw Reardon take an exciting victory in a rip-roaring SX1 final, while Moss finished a close third, the pair split by local South Australian international moto hero Brett Metcalfe, who made a special homecoming from the USA to contest the Adelaide event.

Now at the halfway point of the six round 2015 Australian Supercross Championship chase, Reardon, who came out of retirement to join the CDR Yamaha team this year, heads the SX1 standings with 102 points from Moss on 95, making every point critical from here on in through the title chase.

“We’ve got a couple of weeks break before the next round at Jimboomba, back in south-east Queensland, which is where I come from,” says Reardon, who was in white-hot form last weekend at Adelaide, winning two heat races, topping the Dash for Cash contest and then coming back from stalling his bike in the final to take an emphatic second straight victory in the Championship.

“Round two at Jimboomba a few weeks ago was a great event and I can’t wait to get back there for round four.

“We’ve got the best bike on the track at the moment and things have really been coming together lately,” enthuses Reardon, who is clearly getting a roll on as he eyes off the Supercross number one plate for 2016.

After starting the 2015 Championship as firm favourite, given he enjoyed a clean sweep of five wins from five starts in last year’s series, Moss is now playing the role of chaser after a pair of third places at rounds two and three following his Bathurst round one win.

“There was some great racing and the three of us out front separated ourselves from the field quite a bit,” Moss says of last weekend’s barnstorming Adelaide event.

“A third place was good and keeps us in the championship hunt, but I’m a racer and want nothing less than to keep that number one plate at the end of the year and stand on the top step of the podium each week.

“We have a couple of weeks break now before we head back to Jimboomba, so we will just put our heads down and work hard in the break and come out swinging at the next round.”

But last weekend’s Adelaide event was the toughest win yet for Decotis, as Serco Yamaha young gun Luke Clout made the front running through the majority of the Final, before Decotis eventually moved into the lead and carried on to the win. Penrite Honda Wilson MX team rider Jackson Richardson completed the SX2 podium in Adelaide.

Along with the premier SX1 and SX2 classes, round four of the 2015 Australian Supercross Championship at Jimboomba on November 21 will also feature SXD and Junior race classes, while the youngest riders in the sport will get their chance to strut their stuff on the all-new J2 track design in the Cobra Cup, plus fans will be treated to the eye-watering action of a Best Whip contest.

Tickets to the J2 event are on-sale now via the www.e-ticket.com.au web site.

Fans attending the J2 round can also go in a draw to win the Ultimate VIP Experience, where the winner will score a tour behind-the-scenes of leading race team transporters and get an exclusive meet-and-greet photo session with their favourite rider, as well as scoring a signed race jersey. For full details and to enter, simply go to the ‘Jimboomba X Stadium’ Facebook page and follow the instructions.

It’s the GoPro fourth round of the 2015 Australian Supercross Championship presented by Penrite Oils at Jimboomba X Stadium on November 21 and it’s the round where Supercross fury will once again be unleashed … bring it on!

If you have some spare time up your sleeve we definitively recommend watching this. Anaheim 1 is just around the corner! […]