Serco Yamaha’s Luke Styke surged home to win the final round of the Australian Supercross Championship and in the process take the overall championship win making it a near perfect season for Styke and the Serco Yamaha team. 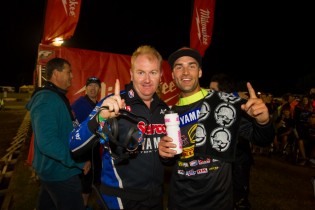 Styke entered the final round five points behind Pro Lites points leader, US import Gavin Faith, and needed to win the round and Faith to finish outside the top three to secure his second championship for the year and pull off a stunning upset.

Right from the drop of the gate, Styke stormed to the lead and took control while a dramatic race unfolded behind him. Faith took a small fall early in the race when he hit the back of another rider in the opening exchanges and the championship was suddenly on the line.

Faith then started to carve his way back through the field and nearly wrestled the championship back into his position when he fell again with only a few laps to run and effectively handing the championship to Styke.

But the drama wasn’t over as a tight knit pack had closed in on Styke and the battle for the lead was on. He managed to hold them off, take the race win and slam his fist skyward as he celebrated his championship win.

“Man, what a night!” Styke sighed. “I just wanted to win the race and at the very least put some pressure on Gavin to finish right behind me to earn the championship.

“I couldn’t really read the pit board but I was able to get a glance across the track every now and again to see where he was. He went missing one lap but I wasn’t sure if he had made up a heap of ground or went down so I had to keep going for it.

“Then, I had Brendan Harrison all over me on the last lap so the pressure was on all the way to the finish.

“I’m so pumped to win the championship and it’s a great way to go out with the Serco Yamaha team. I’m off to Europe next year to contest the world MX GP’s with Yamaha and this was a championship that capped off a great relationship I have had with everyone at Serco and Yamaha Australia,” he signs off.

Team mate Luke Arbon put in his best performance of the year to finish the final round on the podium in third place. Arbon was in the heat of the battle in the entire main event and never outside the top three from the drop of the gate.

Arbon rounded out the championship in eighth place, even with a DNF at the Phillip Island round. It was an impressive performance from the 21 year old South Australian who only a few months back was competing at local events around Adelaide.

“I can’t thank the Serco Yamaha team enough for this opportunity. I have had a great time and the bikes are amazing.

“I was determined to get on the podium before the championship finished and it was nice to be up there with Styke when he claimed his championship trophy,” said Arbon.

“I couldn’t be prouder of my team and the effort they have put in all year. It has been a long season but everyone from the riders to the mechanics has worked tirelessly and the results have been amazing. Also thanks to our team of sponsors and Yamaha Australia for their continued support.”

BLUE IS BACK! We spent two days on the 2016 WR450F and it’ll take the whole next week to wipe the smile of our face PHOTOS BY GREG SMITH/iKAPTURE We’ve been salivating at the prospect […]