Reigning two time champion Matt Moss has picked up exactly where he left off in 2014, trumping the field to show he is once again the top contender in the SX1 class.

Story and Photos by Hayden Gregory 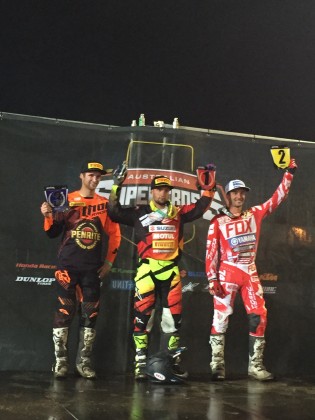 As thousands of people made the annual pilgrimage to Bathurst for Australia’s biggest weekend of Motorsport, it was the two wheel machines that stole the show.

An afternoon downpour was not enough to deter spectators as the crowd built in anticipation of the first round of Supercross. The Bathurst Showgrounds were buzzing as a host of international and local stars gathered to compete for the 2015 Australian title.

I took my position on the sidelines to watch the heats closely, the roar of the big powerful machines echoing through the grandstand. As predicted the big guns were on song, Matt Moss, Gavin Faith and Dan Reardon qualifying fastest for SX1 while Luke Clout, Luke Arbon and Jimmy Decotis finished top three in SX2.

A busy schedule followed for the night as the rain stopped and the track was left in perfect conditions. In between a monster truck exhibition the riders made their way to the starting gates for the heats. While results would not reflect final standings, riders were out to make a statement, to qualify for the big show and to entertain the sea of Supercross fans. 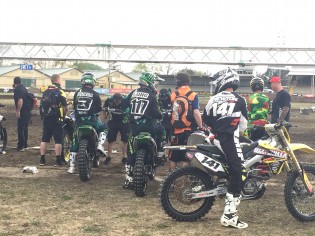 The big boys started off proceedings with Lawson Bopping taking out SX1 heat 1 from Kirk Gibbs and Gavin Faith. Heat two saw reigning champion Matt Moss triumph after a fierce battle with Dan Reardon which showed no love has been lost between the pair. Venezuelan rider Anthony Rodriguez finished third.

The first SX2 heat saw Luke Arbon take the holeshot before checking out on the field to lead Lewis Woods and Wade Hunter. In the second heat international superstar Jimmy Decotis secured a convincing win dominating the field to show the Aussie fans that he is not just here for a holiday. Geran Stapleton finished in second place ahead of Jesse Madden in third.

With positions sorted the crowd was ready for three blockbusting finals, myself included. If I thought the heats were exciting I had another thing coming…

The SXD class served as the perfect entree as the 19 year olds put it all on the line riding not only for championship points but also sponsorship opportunities. As the chequered flag waved Yamaha was head of the class with Mitch Evans and Jordan Hill finishing first and second. KTM‘s Kaleb Barham rounded out the podium to conclude a strong first round.

Edging closer to the edge of my seat, the gates dropped on SX2. Serco Yamaha’s Luke Clout took the holeshot before taking control of the race. American Jimmy Decotis had a poor start before working his way through the middle of the pack with ease. Showing commanding speed Decotis brought the crowd to life as he set sights on leader Clout and set up an intense bar to bar battle. The pair duelled for the majority of the race before a slick pass by the American allowed him to take his first round victory in Australia. Clout rode a brilliant race to take second place with SG3 Husqvarna rider Luke Clout finishing in third. 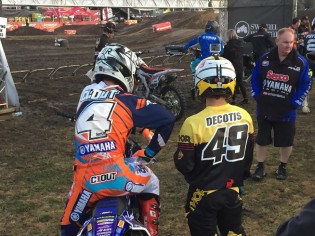 “Yeah, that bad start in the Final really made it tough,” Decotis explained. “But I just settled down and rode strong and worked my way through and then when I caught up to Luke, we were both riding really good and we had a good race until I could finally get the edge.

“The track tonight was tough after the rain this afternoon and the track crew did a great job.

“I’m really happy to win first time out in Australia, it feels great. I can’t wait to head to Queensland and the next round next weekend.”

With the SX2 final proving to be the race of the night I couldn’t have been more excited for the SX1 main event.

Reigning champion Matt Moss was first out of the gates taking the holeshot and chasing nothing but clear air in the first few laps of the race. Behind him a battle was shaping up between Dan Reardon and Gavin faith with the two going head to head before a small slip up from Faith allowed the Australian to pass by. In a dominant showing, Moss was never run down taking the round victory and proving to everyone that once again he is the man to beat. Reardon was able to hold off reigning SX2 champion Gavin Faith as the pair finished second and third respectively.”I knew what I had to do tonight, and that’s exactly how it went down, so I am rapt to get the win,” said Moss.

“I’ve been working so hard coming into this event and all that work is paying off. I felt great at the end of the 20 laps. 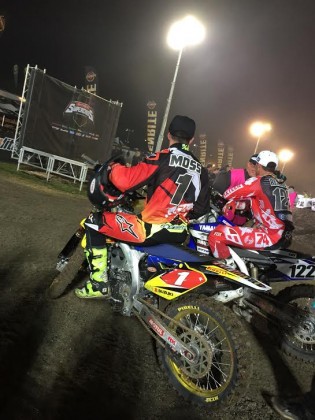 Round one proved to be a great spectacle showing that Supercross is alive and kicking. The riders entertained, the fans were vocal and the season was kickstarted in the best possible way.

Bring on round two in Brisbane next weekend.

Hear from the top performers at round five of the Monster Energy Supercross series. […]

The ‘80s and ‘90s were a very successful period and a lot of the people involved then are still directly involved with the sport now in many different ways. […]