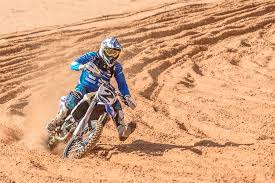 The prestigious and long standing event in the surrounding desert of Hattah in country Victoria saw nearly 350 riders take up the challenge but it was Green, on his YZ450F, that landed on the top of the podium.

Green kicked off the weekend strongly, taking pole position after the Saturday prologue, a full second ahead of his nearest rival. Faced with eight, 38 kilometre laps of sandy, whooped out terrain on the Sunday, the event becomes the ultimate test of fitness, rider skill and bike durability.

Nearly four and a half hours of racing saw Green take a convincing win on board his Yamaha YZ450F. He was involved in a tight four way battle during the opening two laps but eventually broke clear and stretched his lead to a comfortable gap by the half way stage.

“The speed on the first two laps was crazy,” Green said after the event. “A few of us were going backwards and forwards and it seemed really difficult to lead. But after a few laps, I seemed to find my flow, got to the front and was able to just ride my own race.

“I had a drama free run the whole race until the final lap when I crested a hill and jumped into a fallen lapped rider. It was a bit scary as I didn’t see him until I was already committed but luckily no damage was done and I was able to pick it up and get to the finish line,” he laughs.

When the finish flag flew on the eighth and final lap, Green had a lead of 2minutes and 19 seconds over second place.

“I’m pretty pumped to win. The Hattah race is such a cool event and the atmosphere is awesome. This is only the second time I have done it but I love racing here and the loop is unreal to ride.”

“I finished ninth in the prologue and was frustrated with how I rode but I also knew that if I rode properly, then I would go pretty well,” McCormack offered. “I made some passes and kept trying to be smooth and consistent the whole race and I was able to pull off a fourth place which I’m really happy with,” he ends.

On hand to watch his riders was team manager, AJ Roberts, who stood down from riding duties to work with the riders.

“It was a very pleasing result and both Josh and Tom rode exceptionally well. Both prepared well for the event and our bikes were fast and reliable all weekend.

“A huge thank you goes out to the Active8 Yamaha crew and our sponsors as events like this really are a team effort and everyone put in the hard yards for the success we had this weekend.”

The off road fraternity now continue to track west to WA for the jewel in the crown of off road racing, the Australian Four Day Enduro (A4DE). The event takes place in Hervey, South of Perth, and the Activ8 Yamaha team take in good form after the Hattah result.

James Stewart to race in Australia

One of the greatest dirt bike riders on the planet looks set to win. […]