Husaberg Australia rider and former A4DE champion Jarrod Bewley is “finding his groove” in this year’s Yamaha Australian Off-Road Championship, and his fat points haul at the weekend’s fifth and sixth rounds at Corner Inlet, Victoria promises even better things to come. 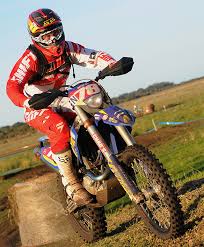 Bewley finished runner-up in the super-competitive E2 class on Saturday for fifth outright, then backed that up with sixth outright on Sunday.
Husaberg team mate Scott Keegan’s weekend was a little more up and down, the FE350 rider withdrawing from Saturday’s XC after his shoulder freakishly dislocated while riding. After re-locating the joint, Keegan rested up, taped up and came out swinging (carefully) on Sunday to be an impressive 6th in class and 9th outright.

Jarrod Bewley (E2: 2nd, 4th – Outright: 5th, 6th) “I was stoked with this one, hopefully it bumped me up a little bit in the standings. The rough track and the sandy conditions would have been a struggle if you weren’t enjoying them but I really was – my bike was handling the conditions really well. I got a decent start in the 3-hour and after being 9th on Lap 1 I moved up to 6th by half distance and finished 4th outright and 2nd in E2, but along the way I missed a fuel stop and had to cut the bunting to get into pit so I got a two-minute penalty which dropped me to 5th outright. Today went well and I ran 4th until the fifth heat, and finished sixth. I’m getting it together more and more and finding my groove again, so this was a good one to build on.”

Scott Keegan (E2: DNF, 6th – Outright: DNF, 9th) “There were a couple of little whoops and I let the front float a little like you do in sand, and must have been just the right angle to yank it out. It’s just weird after I’ve done so much so much riding lately. The pain wasn’t unbearable, but I couldn’t hold my elbow up and could barely hold the bar so all I could do was cruise back to the pits. It took us an hour so to get it back in. I iced it, wore a sling all night, got some anti-inflammatories into me and decided to ride Sunday. Sunday the track was pretty chopped up, even though the races were only 10 mins, I couldn’t keep strong elbows or anything, and adjusting my riding to compensate sort of hindered things towards the end. Still, my speed was okay even though I couldn’t be too aggressive; Jarrod was only 15-20 seconds ahead of me. It was an okay day really, considering everything!”

The New Zealand MXGP rider experienced the highs and lows of racing over the weekend, forced to retire from moto one before rebounding as runner up in the second. […]