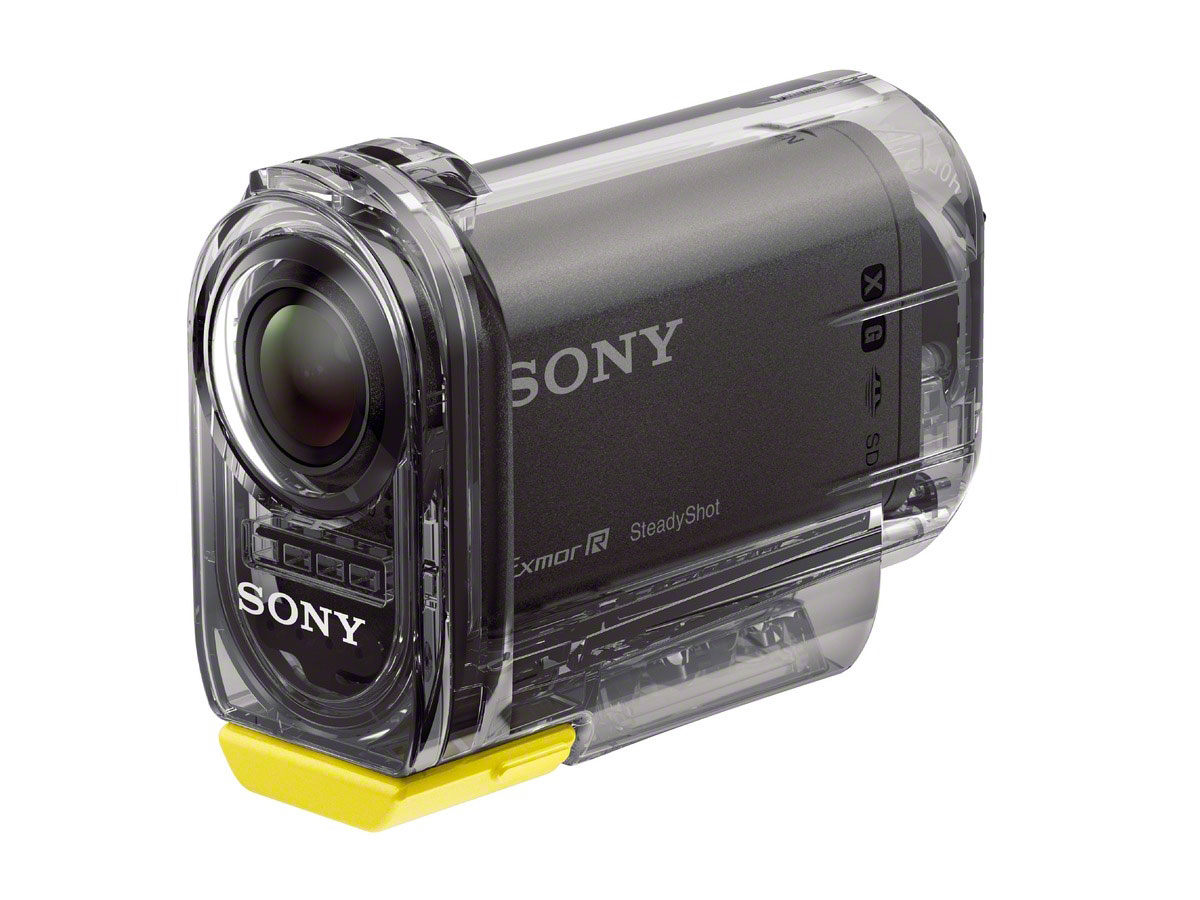 Introducing a new camera into the action-cam market is a bit like walking into a crowded room where Sofia Vergara is dancing on a stage and yelling, “Look at me!” In this case, how do you take attention away from the GoPro?

Sony is kind of a big deal; it has many leather-bound books (gotta love the movie Anchorman). Sony has either invented or completely missed the great consumer electronic movements since the 1950s. That’s a long an intriguing history that we won’t go into here, but suffice to say the company that invented the Walkman also thought the Mini Disc would compete with the iPod.

Taking aim squarely at the GoPro, Sony has released the HDR-AS15 Action Cam. At a glance the camera is obviously larger than the GoPro and it’s heavier as well, but we’ll leave the direct comparisons till the end and just concentrate on what the Sony offers.

The camera records onto a Mini SD card and the first thing I noticed about that was it’s possible to put the card in the wrong way around, which is how it arrived to us, and then spend time wondering why things don’t seem to be working. However, the menu system is excellent and intuitive. I never got lost in there and the small LCD screen (not for playback) shows enough information, with buttons that take you forward or back through the menu.

You can shoot in full HD (1080p) and back down to VGA (480p). There’s also the option to shoot in slow motion at 60 frames per second (standard is 30fps), or even super-slow motion, which gives you a frame rate of 120fps at a resolution of 720p, which is still technically HD.

Sony has also managed to get a Steady Shot function in there, which is pretty impressive, and it works well, smoothing out helmet-mounted shots so much that it looks like you’re flying through the bush, literally. I wouldn’t use it all the time but it certainly has its place in this sport.

When it’s time to get dirty, the camera gets locked away in its plastic waterproof housing and this is where the first practical problem arose for me. Once it’s sealed in, the only function you have access to is start/stop. That means any time you want to change from video to still or change the settings in any way, you have to take the camera out of the housing, run your settings and put it back in. This is a pain in the arse, especially when it’s helmet-mounted.

The standard mounts also don’t allow you to change the angle the camera sits at so if you mount it a little too far forward on your first best guess, you’ll get mostly front fender and ground shots. Packing WiFi means you can link to your phone (iOS or Android) and that gives you the ability to change settings, but that’s impractical for dirtbikes as we don’t generally ride with our expensive smartphones in our top pockets. You can transfer footage to your phone though, so that all-time crash or jump can be posted online straight away.

The audio quality is excellent and while it does have an external microphone input, you can’t access that through the housing. The input is in a curious spot and I can’t see how you’d use it without the camera being hand-held.

The lens is a Carl Zeiss, which Sony liked so much many years ago that it bought the company. That should generally signal good quality but it doesn’t rotate the picture like the Contour does.

The battery life is perhaps the best we’ve seen in an action cam. It takes a while to charge but it repays you with hours of work.

Is it as good as a GoPro?

Nope. And it’s not just the tech that lets it down for me, it’s also the standard mount’s lack of any adjustment. The GoPro can be raised and dropped but the Sony is locked into wherever you placed that big mount. Get that wrong with only one mount at your disposal and life just got a little difficult.

The video quality is very good but the still shots aren’t up to GoPro spec and the GoPro offers way better shooting intervals starting at 05 of a second, while the Sony’s shortest is five seconds.

Finally the Sony must be removed from its housing to access its menu. While I think the menu system is better than the GoPro’s, the fact that the GoPro can be worked while it’s still mounted and in its housing (with good loud beeps to let you know you’re hitting the buttons) beats the Sony hands down.

And finally the GoPro has an attachable LCD viewing screen. That can be absolute gold in some circumstances.

The Sony is an excellent camera and that’s why we feel comfortable comparing it with the best in the business, but there are some details that need to be sorted in the next generation before the GoPro would raise a sweat.

HDMI — The most up-to-date and highest-quality way to connect to your TV is through an HDMI cable.

HD — High definition. It’s near impossible not to buy a high-definition TV these days.

1080p — This means the picture has 1080 vertical lines of resolution. The more lines, the clearer the picture.

Android — Smartphones like Samsung, HTC and Nexus use the Android operating system.

Mini SD — The memory card in the Sony is similar to the one in most phones. A Mini SD card is about a quarter the size of a postage stamp.

WiFi — An awesome Aussie invention that lets you move digital information between devices without using wires.

Here’s a quick selection of genuine Sony accessories we recommend

Knee braces are the bomb. The shit, the best, they’re on point and they kick arse. […]

The knee brace widely considered the best available — used by many professional athletes not only in motocross but across all action sports. […]

Helmet interior is constructed with a comfortable, Max-Dry material that absorbs & discharges moisture […]