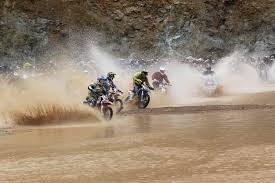 Graham Jarvis is the undisputed King of Hard Enduro after a wet and wild ride at Erzberg.

The relief on Graham Jarvis’ face as he crossed the finish line of the 2013 Red Bull Hare Scramble was clear to see. Hard Enduro’s ‘Silent Assassin’ survived starting the flooded course from the second row of the grid to secure his first win at the notorious event.

Graham had been considered the unluckiest guy at the Red Bull Hare Scramble as it stood out as the only major Hard Enduro race he was yet to win. Despite being the first rider to cross the finish line during previous editions, accidentally missing checkpoints had seen him excluded from the podium on numerous occasions.

“Despite the weather I can’t believe how smoothly the race went for me,” confirmed a delighted Jarvis. “I made it out of the quarry floor without getting stuck and just charged hard from there. I picked off rider after rider until eventually I was leading. I rode Karl’s Diner perfectly and that’s where I managed to win the race. I’m so happy to have finally won here.”

It was due to Graham’s previous misfortunes that he expressed sheer relief on the finish line rather than unleashing a wild celebration. Following Graham home in second place was Andreas Lettenbichler, another rider who was putting to bed the ghosts of a few unlucky trips to Erzberg.

“The start was crazy but I didn’t get stuck. I was about mid-pack but rode flat out through the woods and took the race lead. Ivan Cervantes was right on my tail but after about fifteen minutes I was alone, until Jarvis passed me. I knew he was coming but had no answer from him. He was too fast. Second position is like a win for me.”

Third place at the torturous race was claimed by Graham’s Husaberg team-mate Alfredo Gomez after he got the better of defending champion Jonny Walker in an intense battle for the final podium place.

“I thought I’d never make it up Dynamite – I had no clutch,” told Gomez. “Walker was closing in and I began to panic a little. Luckily I had enough energy left to drag the bike over the hill and make it onto the podium. This was definitely the toughest race I ever did.”

Jonny had done magnificently to fight back after his bike nearly sunk in deep water at the start of the race before finishing in fourth.

“I can’t describe how disappointed I am. I had the holeshot and then my bike stopped in the water. I got going and rode flat out to make up the lost time. It wasn’t enough though and I missed the podium. I’m completely gutted with fourth – I wanted to win so badly.”

Out of the 500 riders who started the Red Bull Hare Scramble only 14 reached the finish of the toughest single day race in the world.

BMW Motorrad is excited to announce that bookings have now opened for the BMW TS and GS Safaris to be held in November this year. […]