Winning an Australian Championship is never easy, nor should it be, and that is certain to be shown this weekend when the 2016 Chris Watson Motorcycles Yamaha Australian Senior Dirt Track Championships, supported by the Port Stephens Council, is staged at the Barleigh Ranch Raceway. 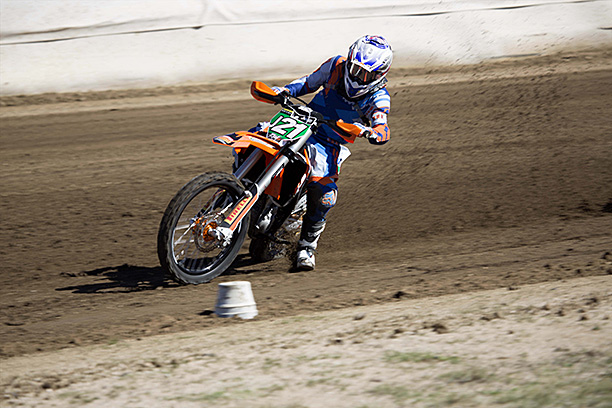 One man who knows what it takes to win an Australian Championship is Keith Davies who is President of the Hunter Motorcycle Club which will stage the championship showdown.

Davies was Australian champion in the premier class three years in a row in the mid-1970s, and he is delighted with the entry list for this weekend.
“We have both quantity and quality in the entries for every class and I am sure that whoever comes out on top will have been very good, and maybe had the breaks go their way” said Davies.

Numbers are boosted by a return of the championship to a traditional dirt track venue this year, whereas the last three years it was staged on an oil-based track.
Given the large entry list for most classes competition is sure to be tough even to get through to the final, or even the repechage.

The six winners who shared the nine class victories at last year’s title meeting are back this year, along numerous former champions, past junior champions now making an impact in the senior ranks and even two former triple world champions from other disciplines.

World Superbike champion Troy Bayliss started out in dirt track and after leaving the world stage has returned to this form of racing where he won three classes at the 2014 Australian Dirt Track Championship meeting – his first ever Australian title wins.
World Speedway champion Jason Crump has dabbled in dirt track racing after he retired from the world speedway scene, but like Bayliss, will come very well prepared this weekend.

Bayliss, Crump, local veteran Paul Caslick and many of the sidecar riders are in their 40s and will be doing battle with young stars like Jarred Brook from Brisbane, Ty Lynch from Adelaide, locals Max Croker and Sean McLellan and Sam Davies from Kempsey.

In between are the champions of recent years led by Luke Richards from Singleton, Marty McNamara from Gunnedah, Jace Castles from Brisbane and Luke Gough from Sydney.

Five former champions are included in the sidecars headed by the two duos who have dominated this decade – Adam and Graham Liebke and Corey Banks and his new passenger Ian Hamilton.

Briony Hendrickson will defend her womens crown against the biggest field ever assembled for their class.

Probably the standout hope for a local success is ATV rider Matthew Griffiths, but he too will have two former champions to contend with.

There will be nine classes of competition – six two-wheel classes, the dirt track sidecars and two classes of ATVs (quads).

Only the top ten scorers after three rounds of heats are guaranteed a place in the finals for each of the two-wheel classes, with the last two berths taken by the first two riders home in a repechage which will be contested by riders placed 11th  to 22nd  on points. For sidecars and ATVs five go direct to the final with one from the repechage.

Those repechage races are often the most fiercely contested at any meeting.
Action on both Saturday, and finals day Sunday commences at 10am.

AORC Rounds 5 and 6 – Everything you need to know

With only days until the next instalment of the 2016 Yamaha Australian Off-Road Championships, we have all the details. […]