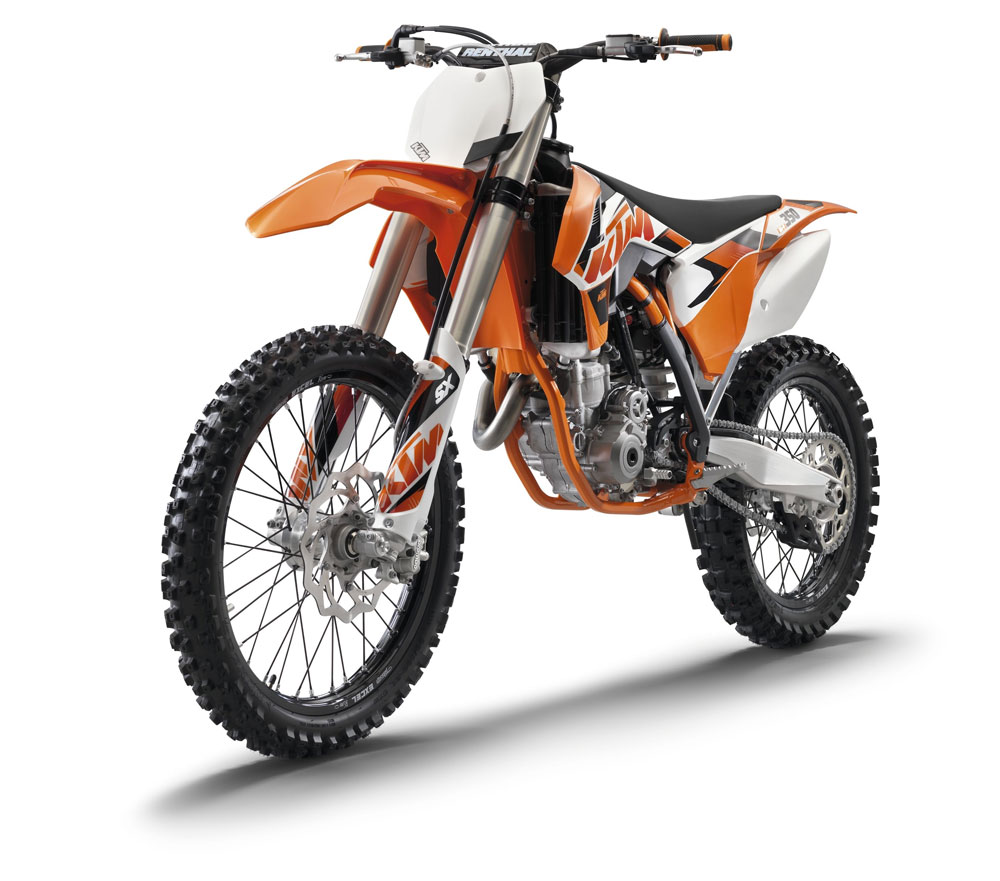 KTM is excited to reveal the details on its 2015 motocross model range, which is currently arriving in dealerships around Europe. The Austrian manufacturer is pleased to continue to set the benchmark in the development of offroad motorcycles with year-upon-year improvements to its ultra-successful motocross bikes with a huge investment in its R&D department to deliver the very latest in motorcycle technology.

The SX and SX-F models, which include championship-winning machines in both the two-stroke and four-stroke categories, have once again been developed by KTM’s R&D department in Mattighofen for model year 2015. Revisions have been made to further improve these class-leading motocross bikes with the 125 SX, 150 SX and 250 SX two-stroke models, along with the world dominating 250 SX-F, 350 SX-F and 450 SX-F four-stroke bikes. For junior riders there are three sport minicycles, the 50 SX, 65 SX and 85 SX.

The entire adult bike range receives updates to the frame, with a weight saving design over previous models and new improved fixing points for the linkage arms. The linkage itself has been re-designed to be lighter and has an improved progression curve, which has also meant the suspension settings in the forks and shock have been adapted to suit, offering an optimum feeling on the track.

New fork boots and a thinner front axle offer better stability with an improved front end feeling, while new fork protectors along with a new steering stem and bolt are all lighter than previous versions. The all-new black-coated Excel rims compliment the factory look and are standard on the 2015 KTM motocross range, with the bikes also having the orange coloured frames usually only seen on KTM’s factory racing machines. All of the SX and SX-F models are now shod with the latest Dunlop MX52 tyres that have been developed with the USA Factory team.

To finish the new look off KTM has once again created a striking new graphic design for the ultimate look on track, while new two-component hand grips and a lighter rear sprocket finish off the overall changes to these high-performance machines.

The 250 SX-F and the 350 SX-F have received a few detail engine changes, including a revised clutch for weight saving along with new o-rings on the oil pump suction screen, which is also included on the 450 SX-F.

For the young-guns of the sport KTM’s mini range continues to boast cutting-edge technology for junior riders and the multi-championship winning 85 SX receives a number of new changes to add to the high quality components already used on the bike, as well as some revisions to the ever-popular 65 SX and 50 SX. KTM prides itself in offering high quality machines to its junior riders, who are the future of offroad sport.

The Red Bull KTM rider has spoken out about his MXoN non selection. […]

Ripping it up at Krusics Ride Park with the big 6ft8 giant Jono Krusic aboard his CR500 and Jimmy Decotis on his 125. […]