The Red Bull KTM rider is set to miss eight weeks of motocross with a cracked vertebrae. 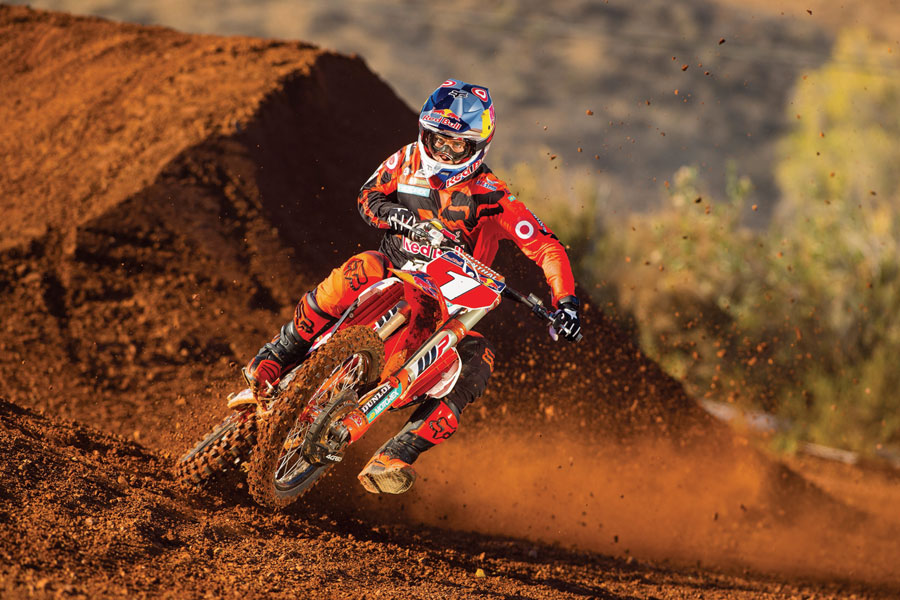 Ryan Dungey’s championship hopes have been dashed with injury ruling him out of competition for a number of weeks.  Dungey picked up the injury after a crash in the second moto at Thunder Valley. While it didn’t seem much at the time, the rider was able to remarkably remount and power all the way from 19th to fourth place by race end.

Dungey scored second for the round behind championship leader Ken Roczen and the injury was kept well under wraps. After a series of tests and evaluation, doctors confirmed a crack to his C6 vertebrae requiring 6-8 weeks of healing.

“It’s very difficult to share such disappointing news,” said Ryan Dungey. “It’s heart breaking mainly because of all the hard work the team and I have put in preparing to defend the motocross title this year. But I’m very thankful that the injury wasn’t worse. I will use this time away from racing to recover fully, knowing this will only make me stronger and more motivated. Thank you everyone for your support and understanding.”

“Obviously Ryan being injured is tough on the team,” said Red Bull KTM Team Manager Roger DeCoster. “At the time we didn’t know about his injury and we were so proud of the way he raced that second moto in Colorado coming from 19th place all the way to almost finish on the podium. But to now know that he accomplished that battling through the pain of a cracked vertebrae shows what an unbelievably tough champion rider he really is. The plan right now is to reassess his return to racing in 6 weeks’ time once he is re-evaluated by his doctor.”

The injury will now give some breathing space to Suzuki’s Ken Roczen who has won five of the opening six motos.

Daniel Sanders has gone from strength to strength in the 2016 Yamaha Australian Off-Road Championship. […]

The Honda HRC rider will miss the remainder of the motocross season. […]

TOBY PRICE INTERVIEW – “The thermometer on the truck went over 50 and just said ‘H.’”

02/04/2019 Damien Ashenhurst FEATURES, NEWS Comments Off on TOBY PRICE INTERVIEW – “The thermometer on the truck went over 50 and just said ‘H.’”

This is a shorter version of the full interview that will appear in DIRT ACTION issue 229.    I’ve had to Google some of the places you been lately because I’d never even heard […]