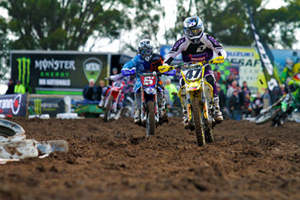 The 21-year-old was again in fine form as the series returned to Horsham for the first time since 2010, claiming the overall victory with the win in race one before he sealed the deal with a third in moto two and second in the final moto.

Waters led much of the final moto before coming under attack from CDR Yamaha’s MX1 series leader Josh Coppins, and the gap between them in the title chase now sits at a slim eight-point margin.

“I was a little bit disappointed Josh came past in that final moto, but I’ve got to hand it to him,” Waters said. “I couldn’t quite hold him off, but anyway that’s how it goes and the track was tough. To come away from today on top of the podium shows the work is starting to pay off, so I’m just stoked and it’s a great day for Motul Pirelli Suzuki.”

Behind Waters overall in second place for the weekend was teammate Cody Cooper, who tied on points with Waters, but was credited the runner-up position overall due to Waters’ higher placing in the final moto.

Cooper finally pieced an entire round together with a trio of strong results, the highlight being a win in the second moto. Cooper also claimed second in moto one and concluded the round with a third in the final moto.

Coppins maintained his series lead with a fighting third overall, proving once again that the gruelling 30-minute moto is where he shines. Coppins was third in moto one and fourth in moto two, before battling to the win in the final moto.

British champion Brad Anderson was fourth for the round for Carlton Dry Honda Thor Racing, while round six winner Lawson Bopping completed the top five for CDR Yamaha.

Defending champion Jay Marmont returned to racing for Monster Energy Kawasaki at Horsham, racing to a consistent effort and taking out sixth overall for the weekend.

The Motul MX2 ranks were taken out by JDR/KTM Factory Racing rider Josh Cachia, who picked up his second overall win of the season. Cachia dominated the round with second in the opening moto before claiming wins in the final pair of motos.

“It was really good to show my speed and get another win here this weekend,” Cachia said. “This is motocross; the track was rough, rutted, sticky and just gnarly out there after the rain. I couldn’t have done it without my whole team, so thank you to JDR/KTM Factory Racing. Hopefully we can keep winning races.”

Behind Cachia overall was rejuvenated Victorian Adam Monea for Zero Seven Motorsports Suzuki, salvaging his podium despite two major falls in the final moto. Monea’s day started with a win in moto one, before he rounded out the weekend with second and fifth positions respectively.

In the Pirelli MXD ranks it was Kiwi Kayne Lamont who scored his fourth consecutive win for KTM. Lamont won the opening two motos of the round, before clinching the overall with a third in the final moto of the weekend.

“I’m really happy to win the round and extend my lead in the series,” Lamont said. “I really need to thank everybody who has helped me, my sponsors and my family for their support. The club did a really good job of the track considering the conditions, so it was a good weekend for me.”

It was a KTM sweep of the podium for the second round in a row, with Dylan Leary second and Choice Motorsports KTM’s Dylan Long third after taking the win in moto three. Lamont’s round win sees him extend his series lead to a healthy 29 points.

The Australian Motocross Championship series will continue at Appin in New South Wales on Sunday, 15 July.

Chucky has talked support, history and goals at an inside look at one of Australia’s most exciting off road racers. […]

Footage from the last ever Tough One which was taken out by Graham Jarvis. […]