Reigning AMA 250SX West Champion, Cooper Webb will stay in the West to defend his title in 2016. 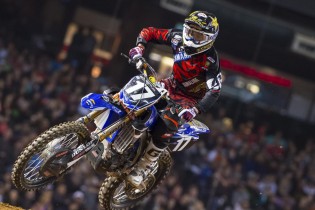 The Yamalube/Star Racing/Yamaha rider will be joined in the 250SX West Championship by team-mates Alex Martin and rookie Mitchell Harrison. Martin scored his first career Supercross podium in 2015 while Harrison was third overall amateur at the 2015 Monster Energy Cup.

Jeremy Martin and Aaron Plessinger will race the 2016 East 250cc Championship for the team. Martin is a two-time AMA Pro Motocross champion is will be searching for similar success in the supercross competition. Plessinger will switch coasts after finishing fifth in last year’s 250SX West championship.

“2015 was a fantastic year for Yamalube/Star Racing/Yamaha, especially with Cooper and Jeremy winning Championships, and Aaron being named Rookie of the Year in both Supercross and Motocross,” commented Keith McCarty, Motorsports Racing Division Manager for Yamaha Motor Corporation, U.S.A.

“It was Yamalube/Star Racing/Yamaha’s tenth year as a bLU cRU-supported team. Bobby Regan and his riders and crew have been great ambassadors for the Yamaha brand, and we’re thrilled to have them racing Yamaha YZ250F machines again in 2016.”

The first round of Monster Energy Supercross will kick off at Anaheim on Saturday, January 9.

SD3 Husqvarna rider Luke Arbon has claimed his third outright win for the year, taking out the Motul MX2 class at the ninth round of the 2014 Monster Energy MX Nationals at Gladstone in Queensland. […]

Factory Honda riders Gavin Faith and Hayden Mellross have dominated their respective categories at this weekends second round of the 2012 Terex Australian Supercross Championships. […]