See what the Australian supercross competitors have had to say in aftermath of the first round in Bathurst. 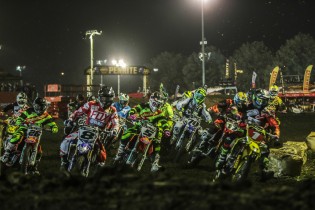 “Well, I think I like this supercross thing. After the MX Nationals finished we got to work right away on getting set up for supercross and the hard work is paying off.

“A huge thanks to the team for the effort they put in and also to my family and the Richardson family back in Cairns for helping me with me riding and getting a good training track up and running.

“I liked the night time atmosphere and the track tonight was pretty tough as it was rutty in a lot of the jumps and it fell apart as the race went on so you had to watch your lines and stay focused. It was good to get the win tonight and it’s a great start for the championship with both Jordan and myself on the podium”

“Second is a good start to the championship and with only four rounds for SXD, it’s important to get a good result every round. I struggled a little in the first race when the track was wet from the rain and I didn’t flow and my corner speed was a bit off, but race two was better, I just needed to get a couple of sections a bit cleaner so I could really pressure Mitch.

“But, second is good and hopefully the start of better things to come as I get to know the bike and the team better.”

“I started the day of feeling good and was getting the track dialled when I messed up a rhythm section. I didn’t actually crash, I just over extended my ankle and Racesafe said I have torn some ligaments in there.

“I was able to have it strapped and got through the night and did the best I could to salvage some points. I got caught up in a pile up after someone crashed in front of me on the first lap, which did not help things.

“We will go back home and rest up for the week and hopefully be back in action next Saturday.”

“That final was actually a bit of a weird race. I pulled all my tear-offs on the opening lap which made things a bit daunting as there was not much light out there as it was.

“I played it smart, I knew even if they got onto the back of me it was going to be tough to pass. I felt good out there and felt I was in control of the race, I knew If I needed to turn it up and go I could go.

“It was amazing to be able to get that win for Jay, Jess and the team. It would be great to clean sweep the series again for those guys and have them go out on a high.”

“Second place is a good way to start any series and even more important in a short six round championship and on a track that was tough to ride at 100. I felt pretty good all day but also felt there were some things I need to improve on as it was my first supercross race in a few seasons.

“So, all up, a pretty positive night and hoping to make more steps forward again next week in Queensland where the race isn’t too far from my house”

“Top five is a reasonable start and it was good to get a race under the belt and get the real race feel and intensity that you just can’t replicate in practice.

“It wasn’t perfect from me but on the whole it was a solid start and something I can build off in the coming rounds.”

“Bathurst was a reasonable start to the championship I guess. The track was pretty brutal today, and after the US trip I’ve had a little less than two weeks on the bike for Supercross. I got off to a great start, and was sitting in third on the first lap when Reardon got past me.

“I started getting a little bit of arm pump at about lap 10 and I had some trouble with my goggles fogging up because of the cold, but overall I’m reasonably happy. I felt like I rode decent, but I also feel like we can make some huge improvements over the next few weeks.”

“It was a bit of a struggle for me all day, just me and the bike weren’t as one tonight. I didn’t have the feel that I needed and the track was pretty tricky – it was sandy and it rutted out everywhere.

“It was definitely good to get the first one out the way though and I kind of felt better the more laps I did around the track. It just took me a bit too long to get going, but we’ve got some things to work on now, and I can make that my worst result all year. We are going to Jimboomba next weekend and I’ve had a bit of seat time on that track, so hopefully things will be much better for me.”

“That was my first ever supercross race. I was pretty nervous at the start, it was a pretty technical track with a bit of rain and stuff and soft dirt, it was pretty slippery in a few spots but I got through it all.

“I think I could have been top five – on the first lap I was in fourth, and rider pushed me off and I couldn’t hit the finish jump on the first lap, and had to roll around the outside of it because I was going to get landed on, so I lost heaps of positions, and then someone made a mistake on the triple and I ended up going off the track there as well. So I lost a heap of spots and ended up back in 13th on the first lap.

“It’s pretty wild out there so you just try and get through it clean! I actually had a lot of fun towards the end of the main event. I found my flow and got into good rhythm. The hardest part is hitting big jumps and corners right behind other people and you’ve kind of got to trust in their ability and take a bit of a risk and hope for the best. The racing is a bit closer for sure, there was a few block passes, and you’ve kind of got to look out for loose cannons going off all over the place, but I think in another few rounds or so I will be a lot more confident and trying to go for race wins.”

“A podium was good, it was really good considering I hadn’t been on the bike for three weeks after Coolum where I knocked myself out. I much prefer supercross, there’s so much contact; it’s fun!

“There’s more intensity, the jumps make it a lot more technical. You can’t muck around with it, you’ve got to get in and get out and make sure you’re clean. I went down in the first and came from a long way last to be fifth, then in the next I got into third, but had a few bobbles and the boys got away from me.”

“It feels so good to be finishing back up on the box and leaving the track happy, not wondering what’s wrong with me. It’s great to ride a bike like I know I can and the way I know my body can perform. I went out in qualifying and qualified second when it was pissing down rain, so that gave me a bit of a vibe. Then I got the holeshot and led every lap in my heat, and just felt comfortable.

“In the main I just rode a little bit tight but still ended up on the podium, so it’s good to get that one out the way. I got a decent start and came out second behind Clout, he was manning up and hitting the whoops pretty hard so he was pulling away, but then I would sort of catch him a bit in a section. I ended up making a mistake crossing over to the start straight again and Decotis got me there, but I ironed it all out and rode around smooth on a track which was super gnarly, so I came out alright.

“I’ve only been back onto five weeks so I told myself that I would be happy with top five in Bathurst, so to get third was awesome. Now my other goal is to finish on the podium every round, and I don’t see any reason to not do that.”

“I felt really good in our first ride on the track but once timed qualifying came around the track was really wet, and when they repaired the track they kind of just pushed mud over the ruts and made them difficult to see.

“I had big crash in my heat race just from catching the mud in my foot pegs and that. I banged up my ribs a little bit and hit my head, so I toughed out the main events to grab a few points because my head was really sore, but I’m just going to be working this week get back to where I was before that crash. And I’m going to redeem myself at the starch out of him.”

Toby Price has finished third overnight at stage 10 of the Dakar Rally, holding onto a 23 minute outright lead. […]

A broken scaphoid in Josh Green’s throttle side wasn’t enough to keep the 21-year-old from finishing on the podium at rounds five and six of the Yamaha Australian Off-Road Championship (AORC). […]