The Aussie legend scored victory on both nights of competition at Sydney’s Qudos Bank Arena. 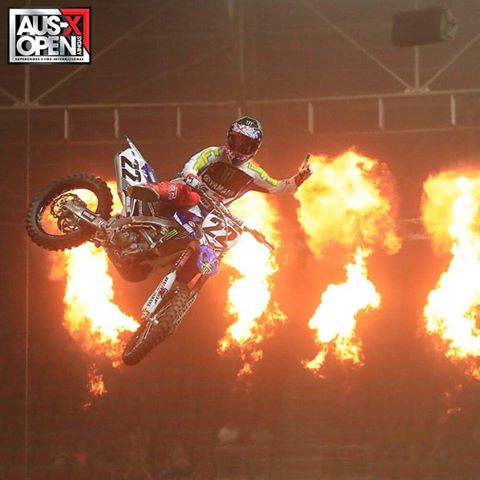 Reed turned back the clock on Saturday night beating home a number of big names including Cooper Webb, Ryan Villopoto and Justin Brayton to claim the win. It was a standout performance by the Aussie, stalking championship leader Brayton for the majority of the race before making the leading pass on lap 16.

The move bought the entire crowd to its feet as Reed then pushed on, securing the chequered flag six seconds ahead of his American rival. Jay Marmont finished in third place, his first podium since coming out of retirement for the 2016 championship.  Cooper Webb settled for fourth place ahead of Villopoto, Reardon, Ferris, Waters and Wil Hahn.

A second place finish by Brayton allowed him to wrap up the SX1 Championship with one round left to race, showing outstanding consistency throughout the series.

In Saturday’s SX2 main, Gavin Faith found the front early before holding on for a spirited win. Jackson Richardson got the best of championship leader Hayden Mellross for second place with the pair primed for a tight championship tussle on Sunday afternoon.

Sunday provided even more excitement for race fans with Chad Reed once again proving a major drawcard. The 34 year old tailed Villopoto for the opening three laps before making his move through the Shannon’s Shortcut lane.  Once in the lead the Yamaha rider was unstoppable, completing the clean sweep before celebrating with a well deserved shoey.

“It feels awesome to win the two nights here at the AUS-X Open. I felt good all weekend, and having the crowd on my side as much as they were was absolutely awesome”, commented Reed.

“I love this event, and I’m all for coming down to Australia – so hopefully we can get back here next year”, concluded Reed.

SX2 racing saw dramatic scenes with championship leader Hayden Mellross succumbing to mechanical issues with just two laps left to race. Mellross was forced to ditch his bike while running in second place, watching Richardson ride by to steal the SX2 championship title. It was the tale of two tapes with Mellross left devastated, and Richardson ecstatic as victory set in following the race.

The final 2016 Australian Supercross Championship standings would see Brayton top the SX1 class ahead of Dean Ferris and Dan Reardon while Richardson claimed the red SX2 plate from Faith and Mellross.

Reed in for Anaheim!

07/01/2016 Damien Ashenhurst NEWS Comments Off on Reed in for Anaheim!

Australian legend Chad Reed has finally revealed that he will join Yamaha for the AMA Supercross season. […]

Adam Cianciarulo and top rookie Austin Forkner both enter the 2016 outdoor season with much to prove. […]