With over 18,000 units sold in Australia, the DR-Z400E is an Aussie trail favourite.

There’s a stigma around the off-road world that you need to own the latest, the greatest, the fastest – forget the fact there are better bikes out there for you. You need the latest, because it’s winning on Sunday, you must buy it Monday. It’s simply not the case, way too many trail riders are struggling to hang onto 450 enduro bikes in the bush when they shold be riding a trail bike, in the trails, enduro for enduro, trail for trail – see where we are going here. A lot of blokes should be on exactly this bike here, the Suzuki DR-Z400E. It’s plush, easy to ride, cheap to maintain and put simply, it’s a bloody good bike.

WHAT’S THE DEAL?
Here at DA, we have ridden the DR-Z400E multiple times. It’s been a stayer in the motorcycle market and has the numbers to prove it – over 18,000 DR-Z’s have been sold in Australia since it was released in 2000. That’s big, really big. For 2017, the Suzuki DR-Z400E has had a bit of a facelift, with black rims and going back to the yellow rear fender both of which assists with a slightly more modern look. Despite the fact that DR-Z’s were once raced at the professional level of Australian Thumper Nats, Motocross and hold your breath – Supercross, yes Supercross, by today’s standards, the DR-Z is a trail bike. There’s absolutely nothing wrong with that. It’s not an enduro competition bike, it’s a trail bike and what it’s designed for, it does really well. The DR-Z is powered by a 398cc liquid cool DOHC engine and handles the bumps via full adjustable Showa conventional forks and a Showa rear shock. Up front, you’ll find a 250mm front brake rotor and 220mm on the back. The Suzuki holds 10 litres of fuel, a little more than most modern machines and is electric start. 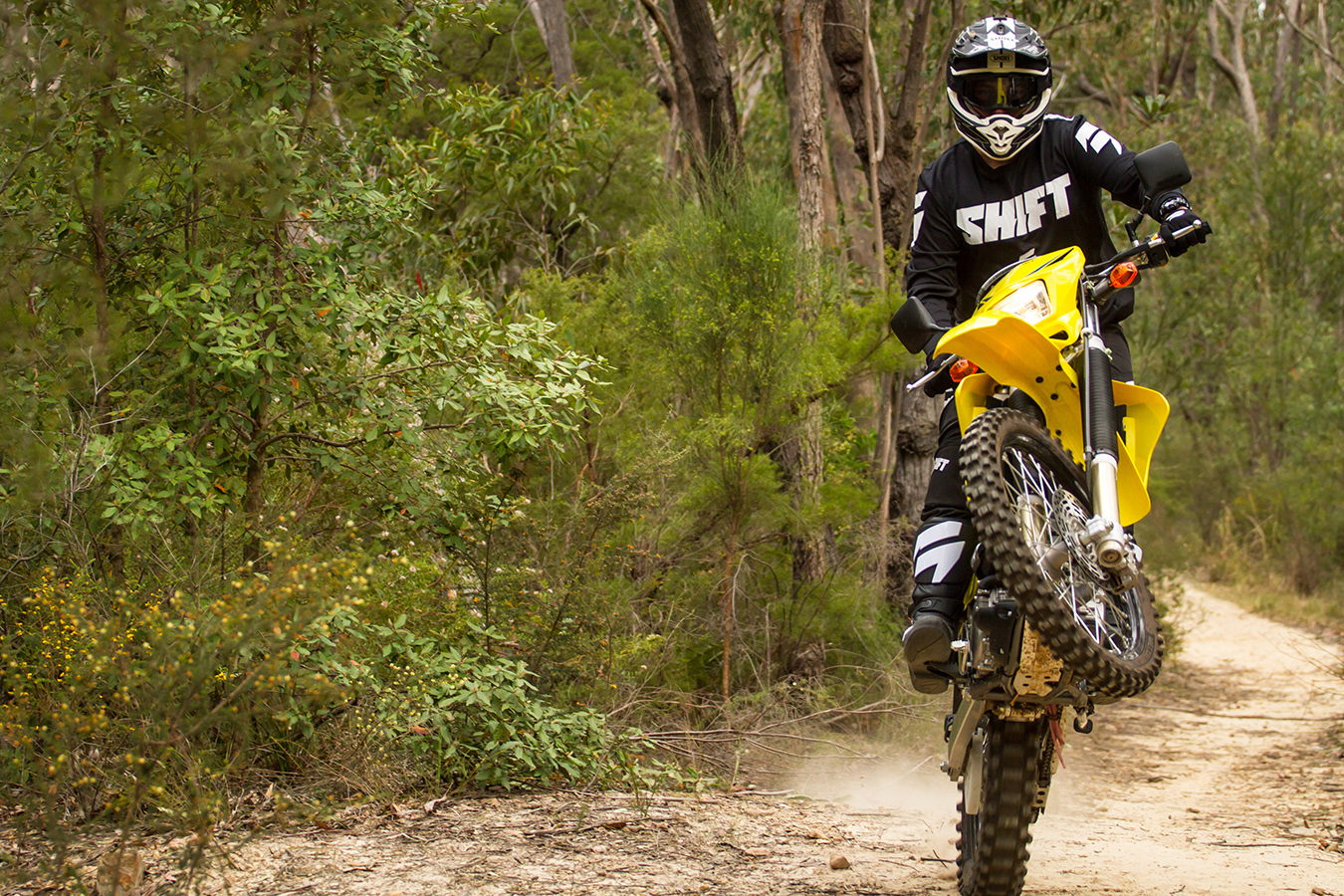 RIDING THE DR-Z.
I had the opportunity to ride the DR-Z400E slightly more than we usually get to with a test bike. It was present at the Metzeler MC360 tyre launch at Mt Kembla where the terrain is tight and about as technical as you would like to take a DR-Z. I felt a little like I had pulled the short straw. The enduro bikes were taken and the DR-Z400E sat there looking lonely. With a hint disappointment, both for the lonely bike and for the fact I had to ride it, I headed into the bush. Within about 200 metres, I actually laughed in my helmet. You forget how bloody fun these things are! The trails were pretty rough and the DR-Z400E just smashes through them, it’s not skimming the top of the bumps, it’s slamming them, absorbing them one by one. It’s really enjoyable. Before long, I realised I was carrying way more speed than I realised. The easy to ride nature of the engine allows you to pick the throttle up nice and early and keep your momentum. In the standing position, the bars a little low, an easy fix, and the grips are full waffle, which personally I don’t like. However as I weaved in and out of the single trail, what I liked quickly overcame what I didn’t. I ended up sticking with one of the other guys who was riding a KTM350EXC-F and although I was pushing pretty hard, it’s fun to stick with a bike like that in the technical stuff for a short amount of time. The DR-Z isn’t a light bike, so it takes a bit of hanging onto when you are switching back and forwards through the trees and trying to ride fast – not really what the bike is designed for.
With the Metzeler launch done, I took the DR-Z home with me. The technical  Mt Kembla trails are pretty tight, and I wanted to get the DR-Z into some trails it’s more designed for, as well as a quick squirt on the road to be reminded of it’s versatility. On wide-open dirt roads, you can sit down and just enjoy the ride. The suspension is plush, you get very little vibrations through the hands and the engine just cruises along at 80-90ks with standard gearing as you take in the Australian bush. In fire trails, it’s great, it’s nice and easy to carry a higher gear and let the engine do the work. On the tar, it’s also surprisingly fun, I can see why the DR-Z Super Motard is so popular, it’s got all the makings of a fun little ripper on the streets. I did the odd run up the café and went the long way home multiple times from the trails. Mid-speed fire trails is where the DR-Z comes into its own, throw In some small erosion mounds, the odd hill climb and you’ve got yourself one hell of a fun day on the DR-Z. The DR-Z is an excellent bike. It’s easy to ride, super smooth and would make a great first bike. Want to race enduro? Then there are much better bikes out there for you. Do you want to ride fire trails with your mates? Make sure you consider a Suzuki DR-Z400E. 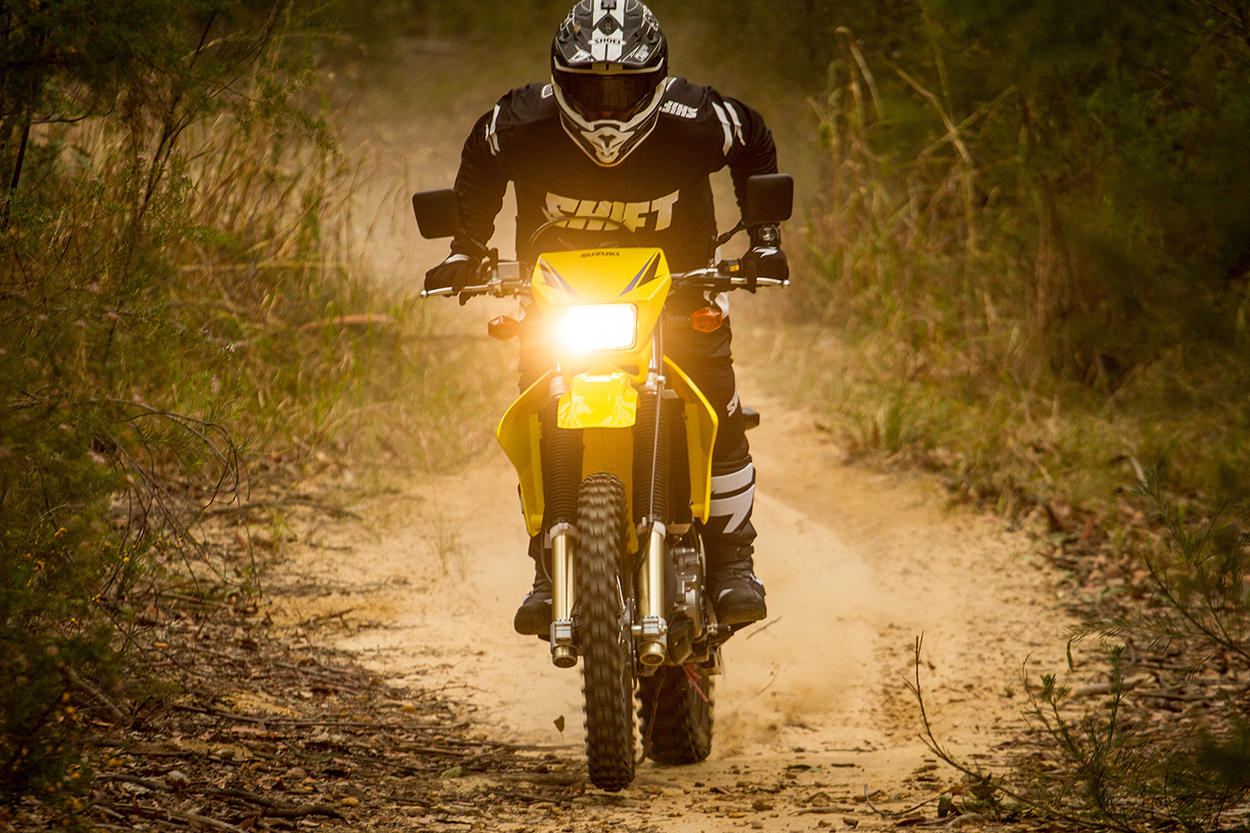 The DR-Z 400E is classed as an enduro bike by the FCAI (Federal Chamber of Automotive Industries) in its sales report. It’s not; it’s a trailbike. You could race one but it would be a poor choice given the alternatives.

There was a time when the XR400 was considered the gun four-stroke enduro bike but if it were released now there’s no way it could stand up to a KTM 450 EXC. Time has moved on and the DR-Z hasn’t kept pace with the competition in tech advances. What it has done is become the most successful trailbike in Australia. It sells by the bucketload. It sells more than the WRF, CRF, EXC and TE. Why is this so?

It sells because the engine is brilliant. It’s a comfortable bike and the suspension is super forgiving. Because it’s reliable beyond most expectations and runs out at a retail price less than $9000.

I’m not being patronising here. The DR-Z’s engine is a great trail mill. And being a key-start machine it also means you can drop down to the shops or ride to work in relative safety from thieves.