A long awaited update of the RM-Z450 has finally become a reality and we had the chance to put the bike through it’s paces. Here’s a quick run down on what we thought. Look for the full test in issue #219 of Dirt Action magazine. 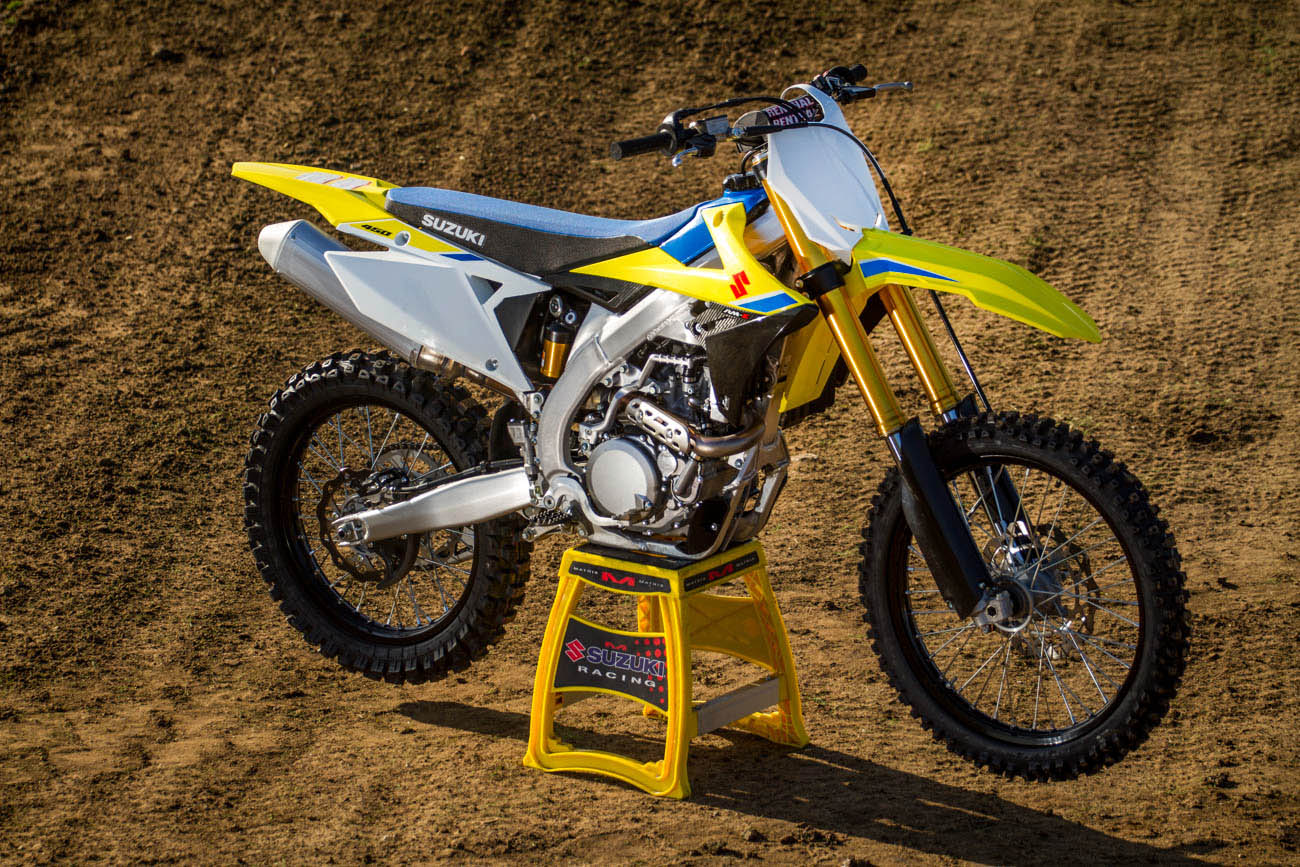 WHAT’S NEW?
Well it’s slated as an all new bike and it pretty much is. A new look thanks to redesigned plastic and the addition of some blue, which I personally really like, gives this bike a presence in the pits. The frame is all new, designed to increase rigidity while being 700g lighter. The head tube is 10mm back from the previous version resulting in a shorter wheelbase and weight has been distributed further forward on the 2018 machine also. The swingarm also has an updated design increasing rigidity and saving 100g. 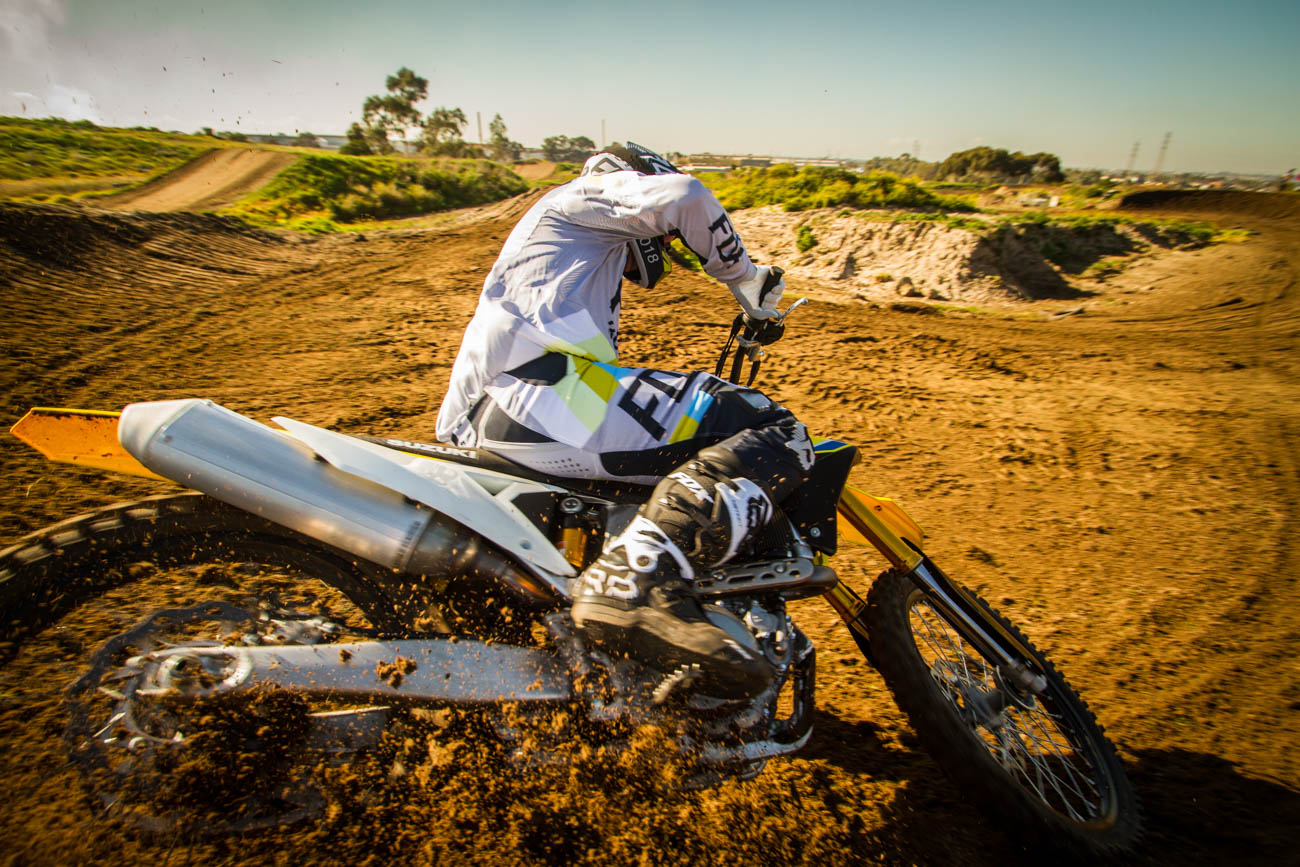 The suspension is an all new package, back to spring forks with 49mm Showa units that claim to be based on an A kit design and the shock is a new Showa Balance Free Rear Cushion (BFRC) design. A design that has been around on factory bikes for a while and now passes on to production. In a nutshell the design balances pressure above and below the piston to provide better control of the stroke over choppy surfaces. The engine has received internal updates but is essentially the same design as the previous bike. The airfilter is 30% bigger and the airbox feeds into the throttle body straighter, while the fuel injection system has also had some tweaks. There is a 270mm front brake rotor and a new straighter bend Renthal Fat bar has been fitted. 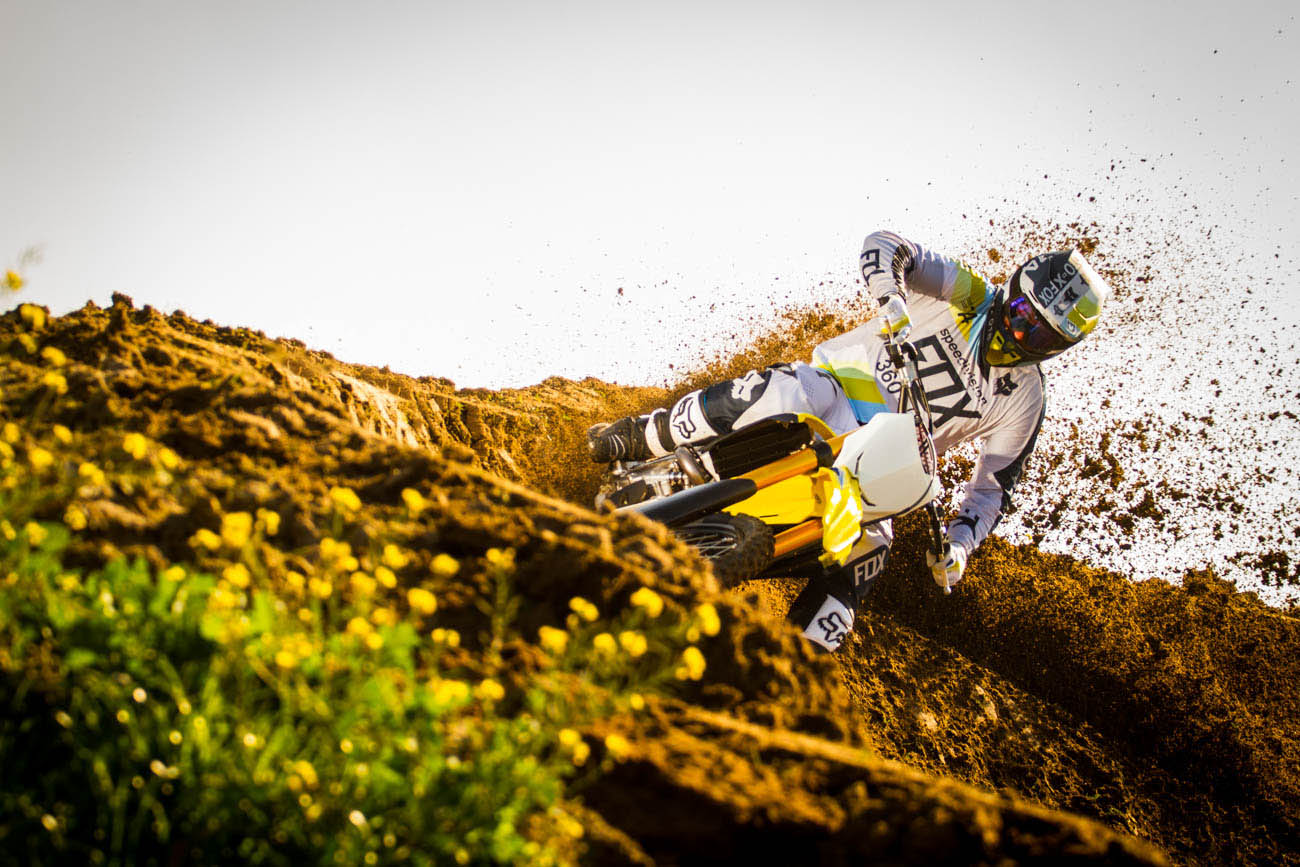 FIRST IMPRESSION
A lap in and this bike feels like an updated version of the previous bike, not like a whole new machine. I say that in a positive way as there are no strange things to get used to and the RM-Z 450 ergonomically is great. I’m a fan of the straighter bend Renthals, the seat is flatter and the bike does feel slim and seamless through the shroud area. There is no problem moving around on this bike and going from standing to seated and back is all good. I never found myself getting hooked up on the plastic at all. The elephant in the room is the fact it still has a kick start, something I think that riders are looking at from a different perspective now. I believe electric start is looked at as not so much a luxury but a time disadvantage on track if you stall or have a little tip over, so fingers crossed its in the pipeline. 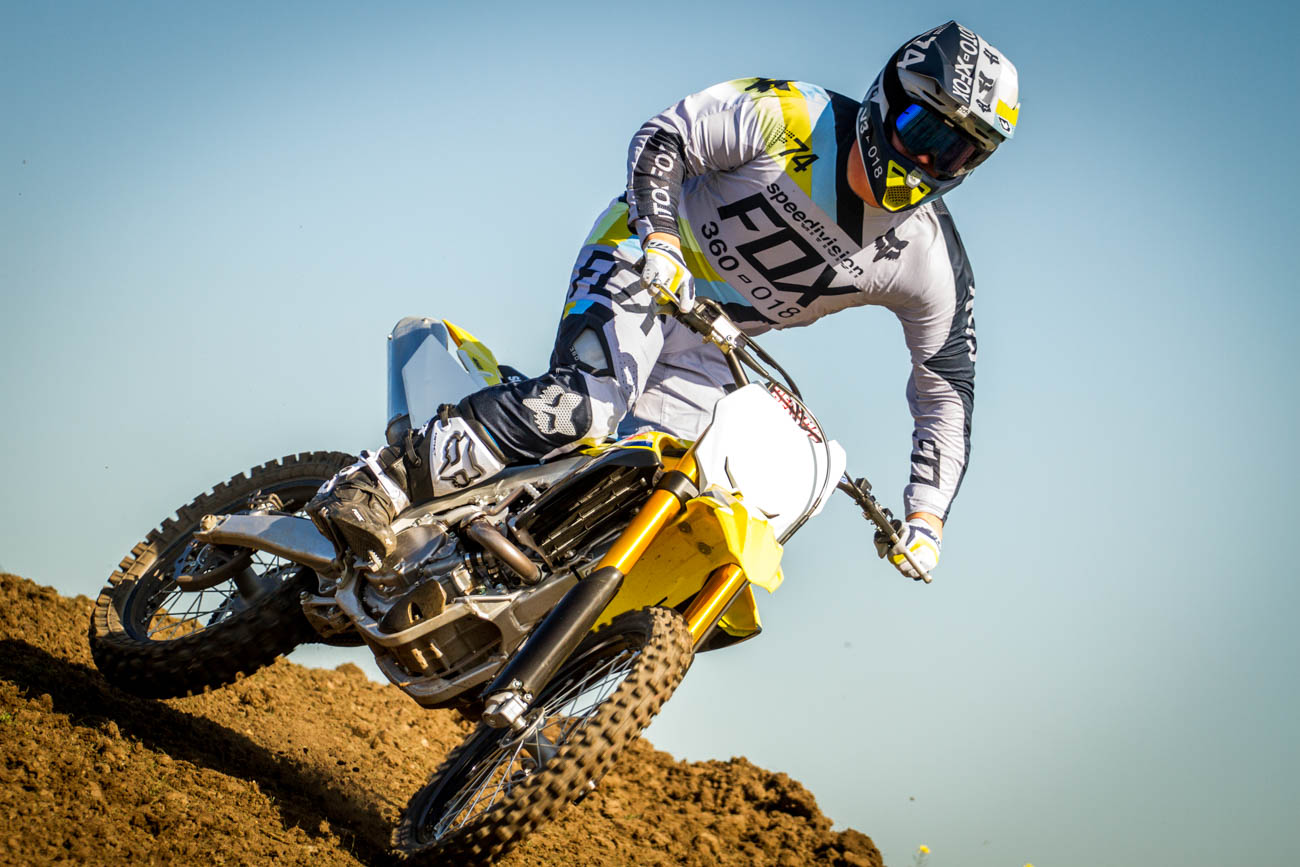 I noticed the front end early and how plush it felt, these forks are pretty impressive. It worked really well over the small stuff and performed great in turns, especially when there was some small bumps mid corner. I firmed it up slightly as the only down side I found was a little diving under brakes but that was all I could fault. Even though it felt slightly soft it had great bottoming resistance and was tested out on some decent size jumps. The rear was much the same as far as feeling plush and working well over choppy bumps. I did increase the sag to get the bike squatting off turns better and to take a bit of weight off the front end and I like the feel after that. The engine is definitely improved over the previous model and the biggest characteristic was how smooth it felt. 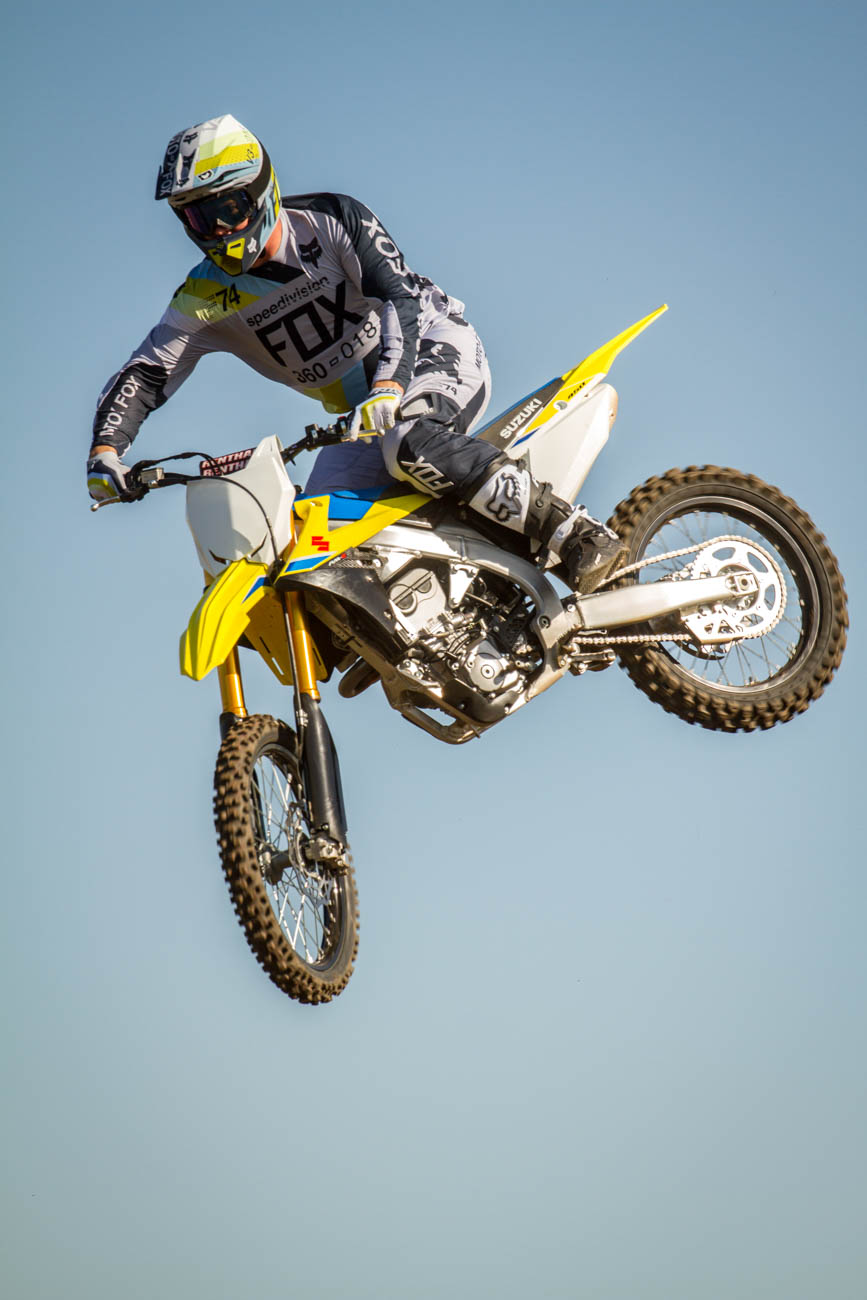 I think you can notice that it’s breathing better as its stronger through the mid range and has a little more over rev. I tried all three of the ECU couplers and Iiked the richer plug which is essentially the more mellow option. I felt the bike has enough torque to pull the smoother delivery well and the mid to top end power felt stronger to me. At no point did it feel mellow at all.

THE WRAP
All in all this bike is what the Suzuki fans have been waiting for, I felt comfortable on it from lap one and it has a sharp handling package that will impress plenty of riders. For the full test and run down check out the next issue of Dirt Action magazine. 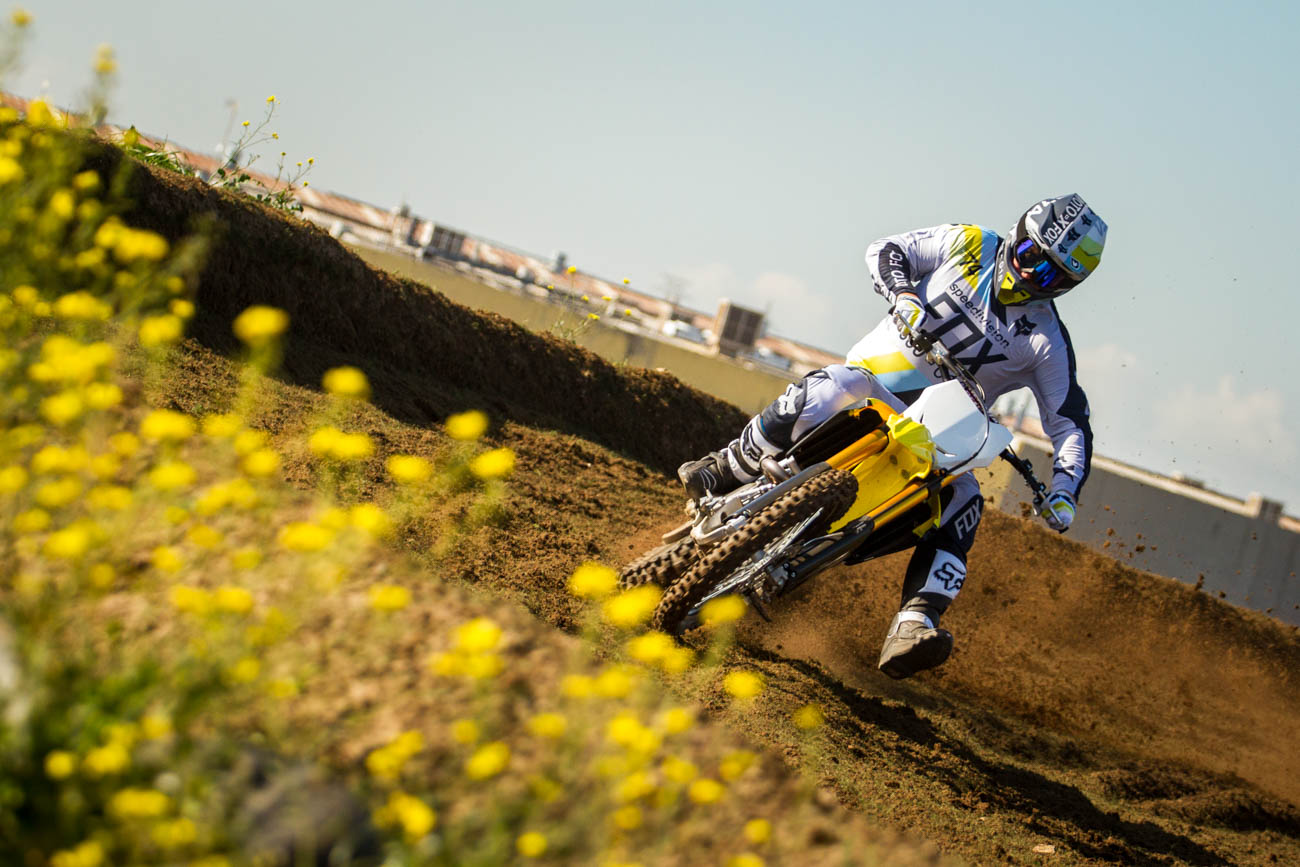 We throw a leg over Lachy Stanford’s AORC Factory Husqvarna FE501 race bike STORY SHANE BOOTH PHOTOGRAPHY MATT BERNARD Big-bore enduro bikes are no longer the huge, heavy beasts they once were. In the past, […]

We get to ride a purpose-built supermoto weapon, the Husqvarna FS 450   STORY & PHOTOGRAPHY MATT BERNARD   I’ve been lucky to ride some pretty amazing bikes since starting at DA — and ride […]

With over 18,000 units sold in Australia, the DR-Z400E is an Aussie trail favourite. STORY MATT BERNARD PHOTOGRAPHY KATRINA BERNARD There’s a stigma around the off-road world that you need to own the latest, the […]