The Yamaha Junior Racing teams pulled down two national championships, five second places and two third places after the week-long event concluded on Friday in a stunning display from the riders, teams and families. 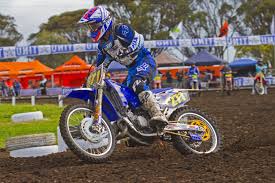 Victorian Jed Beaton picked up his first national championship, taking the 13- Under 15 years 125cc. Beaton was locked in battle with Yamaha teamster Wilson Todd and the pair was simply a cut above the other riders in the class. In the three final format, Beaton and Todd entered the race equal on points and set for a winner take all final.

Todd jumped to the lead with Beaton in his shadow. They motored away from the pack and the battle was on. With two laps remaining, Beaton made his move and slipped by Todd to take the win and the championship in a race that had the entire crowd gathered at the venue standing on the fences surrounding the track.

“This is the best feeling,” Beaton said not long after the final race. “Wilson and I were going at it all week and it was awesome racing him as I know how fast he is and how good he rides. He made me ride the best race I have ridden in the last race and I knew I could trust him on the track.

“I also want to thank the Victorian Yamaha Junior Racing team, our sponsors, Cameron Taylor and my family for their support as this has been a long time coming.”

Dylan Heaton made it championship number two for YJR when he claimed the 15 years 125cc victory after the five race finals were run throughout the week. Heaton was a model of speed and consistency all week on his YZ125 with 1-1-3-1-2- results to take the victory over QLD-YJR member Nathan Crawford.

“2013 has been a good year for me and this makes it even better,” said the quietly spoken Heaton. “The 15 years class has some great riders in there so to win this championship means a lot to me.

“I had an awesome week here in Horsham and the support of the team, my family and Kim Ashkenazi made it better. Thanks to them as well as the Horsham club for running a great event,” he ends.

Between Beaton and Todd in the 13 to Under 15 years and Heaton and Crawford in the 15 years, the Yamaha YZ125 won every 125cc final conducted at the event and proved again what a superb motocross machine it is.

Along with the success of the two national championships came a heap of podium finishes from the YJR teams.

Nathan Crawford stood on the podium twice with a second place finish in the 15 years 250cc as well as another second place result in the 15 years 125cc division. Crawford finished the week with 3-2-2 results on his 250 and 2-4-1-2-1 scores on his 125 to cap a great week for the Queenslander.

Wilson Todd also managed a double podium result after his week at Horsham finishing second in the 13 – under 15 years 125cc with 1-2-2 results and then took third in the 13- under 15 years 250cc with 3-3-5 finishes, with the fifth coming after a first turn crash and then another on the final lap.

Cody Dyce landed in second place in the 12 – Under 14 years 85cc after finishing 9-2-2 in the three finals contested.

“What a sensational result for Yamaha and our Yamaha Junior Racing teams,” states Yamaha’s Ray Howard. “On behalf of Yamaha I congratulate Jed and Dylan on their championship success and all the YJR riders, teams and families for their fantastic efforts last week in Horsham.

“These results as well as what these teams produce during the year at state level continues to show Yamaha Australia is at the forefront at developing Australian motocross talent and we continue to have a proud racing heritage. Well done to everyone involved,” Howard ends.

A full list of results from the event can be found on www.mylaps.com.au

Official Statement From Husqvarna on its Future

The following is a press release that came from Husqvarna in regards to its future under the KTM/Husaberg banner. […]

Behind the scenes with the team for round four of the Motul MX Nationals. […]