We head to Washington D.C for the launch of Husqvarna’s 2016 motocross range and then back it up with a day of riding the new machines at the legendary Budds Creek MX circuit. 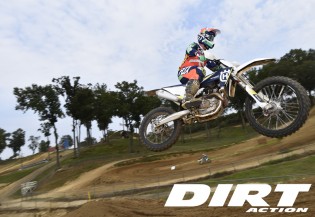 A historical brand that is turning to its rich heritage to define itself amongst its competitors, Husqvarna have backed all of this up with an all new motocross range for 2016. I was very keen to get on track and see what these new bikes had to offer.

Of the three four stroke engines this one impressed me the most. The bottom to mid-range strength of this engine is impressive, for sure an increase from the previous model. A 14,000rpm rev limit means you can stretch a gear an extra metre if required; it also makes the bike feel like it just keeps pulling and when it does reach the rpm ceiling it doesn’t fall off a cliff. With a claimed 46hp at the output shaft it’s an engine package that places the bike among the leaders in this class. 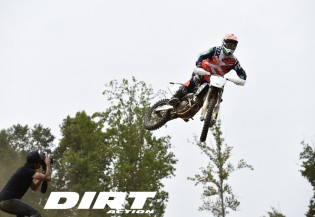 I felt much more comfortable on the 2016 FC so from my point of view the frame and sub-frame changes have been a positive step forward. The updated settings in the WP 4CS fork matched up well with all the changes. The new shock, linkage and swingarm combination seemed to work very well, the rear of the bike felt stable at high speed, especially under brakes at the bottom of hills which is comforting. The bike is balanced and feels nimble in turns thanks to a combination of weight reduction and the efforts to centralise mass.

A significant improvement from the ’15 model this bike is solid package in the 250 class. The engine is on par with class leaders and the new handling characteristics and weight reduction are a marked improvement.

The 350 engine continues to evolve; there is now more torque which makes the bike easier to ride. The increase in torque makes it easy to get out of turns without the clutch and throttle work that was required in the past. The switchable engine map really makes a difference and on the 350 I preferred the more aggressive option. The launch control is a nice addition and given the right conditions I think it is a very useful tool. With a claimed 58hp this bike is now a serious contender more than ever.

The 350 shares just about everything with the 250 so it’s not surprising it feels very much like the 250 in the handling department. There’s slightly more mass moving underneath you but it’s not all that noticeable.

This bike is really starting to find a place and become its own entity. More than ever it’s a competitive option for the 450 class and club level riders will enjoy the fact it’s lighter and easier on the forearms than a 450 and easier to get out of a turn than a 250.

The new FC 450 engine is a solid 1.8kg lighter for 2016 and there is a claimed 63hp being produced. It actually feels slightly smoother than in the past and I was actually quite a fan of the more mellow engine map. If you need to up the ante a flick of the map switch will bring the bike to life. For me the launch control was most effective on the 450 due to the fact you are managing more horsepower than the other bikes.

The bike is certainly more nimble than the previous 450 and it’s thanks to a combination of actual weight saving and the repositioning of components. The biggest difference I felt as an improvement on this bike is the overall plusher feeling from the suspension. The combination of the new frame and sub frame along with the rear shock and linkage seems to have come together pretty well. As the track roughed up I firmed up the compression on the fork 4 clicks and it worked well.

I can’t help but think how far this bike has come in a short period. The engine is a little more of a tamed beast than last year, not slower just more rideable and the handling has moved in a positive direction. It will be fun to ride all the 450’s back to back at the shootout, I think this bike will be right in amongst it.

For a more in depth look at the 2016 Husqvarna motocross range pick up a copy of Dirt Action 198, available in store from mid October.

Nagl Re-signs with Husqvarna for 2017

The German rider will embark on a third MXGP season with the team. […]