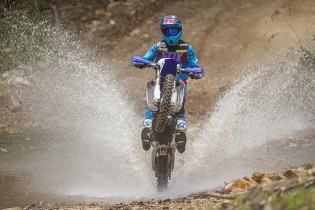 We’ve been salivating at the prospect of riding the 2016 WR450F for some time and so it was a pretty epic moment to turn up to a freshly prepped grasstrack to start our two days of riding for the launch of Yamaha’s newest enduro machine.

The WR-F’s specs are well known to most by now but the easiest way to sum it up would be to point out that it’s pretty much a 2016 YZ450F with a headlight.  It has far less in common with the 2015 WR450F than it does with the YZ-F. Of course there are points where the bike has seen the enduro treatment like with the 18 inch rear wheel, speedo, bashplate, hubs and of course the electric start, but one of the biggest drawcards over the previous model is that it’s a claimed six kilos lighter.

We’ve been over the differences a fair bit in previous posts though so let’s get to the riding part. The launch was hosted by Active8 Yamaha’s Josh Green who laid out a grasstrack for day one and plotted an 80 kilometre trail ride for the following day. The weather was stinking hot and expectations were high with not only Green but Dan Milner, Beau Ralston, Tom McCormack and Chris Hollis there – most riding the bike for the first time alongside the journos. Of course, Josh Coppins, the man responsible for tailoring a YZ450F for the bush was there too so there was no shortage of weapons giving these bikes fresh from the crate a flogging. 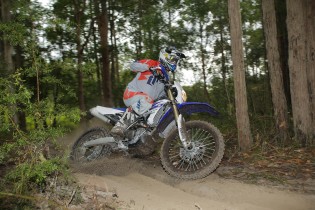 The 2015 WR450F had a brilliant engine. It was powerful and smooth and never really scared you but had more than enough mumbo and response to be fun, thrilling and usable. The 2016 reverse cylinder engine feels quite different and as you’d imagine given it’s the motocross donk, it’s a fire breather. From the moment you click into gear the 2016 feels little like its predecessor whose linear build from the bottom to mid has been replaced by an explosion of fury that’s hard to contain in the lower gears and yet somehow remains tractable.

That grunt stays present all the way to the top and this will be a big plus for the Yamaha riders taking on races like Finke. We actually used the Yamaha Power Tuner to smooth out the delivery and make the bike easier to handle in the tight bush sections. Chris Hollis did much the same in search of a slightly more tamed output to suit his silky smooth style. This engine will blow people away – you asked for a racier bike and Yamaha has delivered via input from the great Josh Coppins.

The forks are the same KYB units as found in the YZ-F and carry 10mm more travel than the 2015 WR-F. The spring rate stays the same but the factory settings are a little different. The shock offers 19mm more travel and the spring is a 56 compared to the 54 on the previous model. The settings are again further refined to make it a better feel for the bush. At high speed the bike is incredibly stable and tracks precisely with excellent feel through the front-end. There are faster steering bikes but they often suffer on the faster sections. We certainly had no dramas in the single trail and watching guys like Dan Milner ride a stock bike at the speed he was is something pretty special. Dan joined ride-leader Josh Green and the bike’s ride developer Josh Coppins on the second day’s trail ride and watching those guys really enjoying this new bike and pushing beyond what us mortals could dream of was epic. 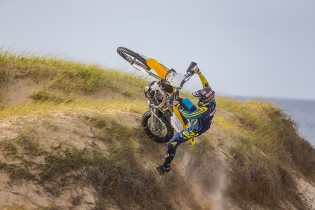 For 2016 the WR450F will come in a blue scheme as always but Aussie and Kiwi riders will get the chance to grab a limited edition 60th anniversary yellow graphics kit as well. We’re the only territory that gets that which is pretty cool and while the bike with a blue kit will sell for $12,999 the yellow kit will be a little more at $13,199.

The US version of the bike also has a fixed ECU which means they can’t mess with the engine mapping while we can do that all day with the Power Tuner.

The bike is a claimed six kilos lighter and you can feel it. It’s not hard to make it lighter again so hopefully that buries some demons now but this bike is no need of anything drastic to get out and ride or race.

The handling is very good but the engine what most people will talk about. This is a powerful bike that will challenge riders and leave no doubt that it’s a game changer for the WR-F line-up, which already includes one the best 250Fs in the WR250F. It’s aggressive but it holds traction well which can provide some quality ‘oh shit’ moments as a single trail corner approaches faster than your brain computes. It’s also a whole heap of fun and that’s why we’re all here right?

Stay tuned for DIRT ACTION magazine issue 201 where you’ll find the full test report and then follow the progress of our WR450F project bike as we put the bike through the ringer for a full year which is something we’re super keen to get started. 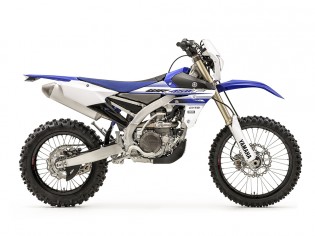 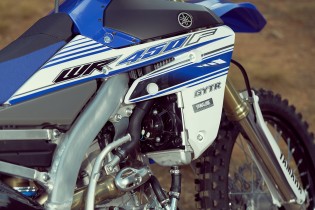 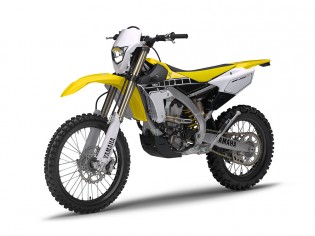 The world’s best Freestyle Motocross riders will be wowing crowds with speed, height and skill when they bring their A-game to compete in the first Australian FMX Grand Prix, staged as part of the 2016 Formula 1® Australian Grand Prix. […]