MX2 National champion Jay Wilson has spoken out about the upcoming MXON and 2015 Australian Supercross Championship. 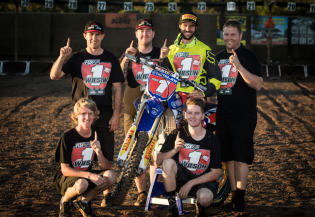 The 21-year-old will fly to Europe this week to don the green and gold of Australian in Ernee, France. Joining Dean Ferris and Todd Waters, Wilson looks forward to the MXoN experience and is hoping to do the best that he can for his country.

Despite having never been to Europe, Wilson has had a fantastic 2015 season winning a national championship in both Australia and New Zealand. He will undoubtedly be looking to take this excellent form into the competition and is ready for the challenge.

“I’ve never even been to Europe, so I just can’t wait to get there and get into it,” enthuses Wilson, who will line up at the prestigious event aboard a potent Rinaldi-kitted Yamaha YZ250F race bike.

“Of course I’ve seen photos and videos of the track, and it looks awesome. It looks hard-packed, which I like, so I can’t wait to get there and represent Australia.

“I’m sure the whole atmosphere of the event will be huge and I’m hoping we can bring home a result for Australia to be proud of.”

Following the MXoN, Wilson will have next to no down time as he jumps straight on a plane and heads back down under for the Australian Supercross Championship. The Josh Coppins Racing Yamaha rider will be looking to add to his impressive 2015 title collection as he battles in the SX2 division.

“I’m so looking forward to the new championship and the involvement of the new promoters and the new events. I’m so excited to go racing.”

“Supercross is more natural to me (than motocross) and we have already started testing and gaining a base setting for our Supercross race bike. As I soon as I get back from France, we will be full-time into Supercross mode – it should be awesome.”

Wilson boasts an impressive Supercross background having been a former Under 19s Australian champion. The Gold coast rider has also had success across the ditch with a pair of New Zealand Supercross championships to his name. With that in mind, Wilson will be a serious contender for the MX2 crown as the championship rolls around, beginning October 10th at Bathurst, NSW.

The KTM rider has opened his account with a win at the first round of the 2016 MX Nationals.  By Hayden Gregory As the first race of the season kicked off, Husqvarna’s Luke Arbon scored […]

Courtney Duncan to Return in Switzerland

The New Zealander has recovered from hand surgery and will rejoin the FIM Women’s Motocross World Championship. […]