Check out the crash that left James Stewart unconscious in Anaheim. 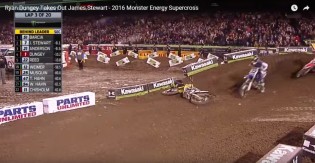 It was Stewart’s first AMA race back after serving a sixteen month suspension and his night was brought to a short end. Yoshimura Suzuki team manager Mike Webb is hopeful that he will be fully fit for round two at San Diego.

“James came in ready to race,” Webb said. “Everything was going to plan, maybe even better than we expected. He was strong in timed qualifying, went out and qualified directly into the main from his heat race, had a great start in the final and then out of nowhere he ends up on the ground due to no fault of his own. It’s a real shame for all the work he put into this comeback, but I’m hopeful he’ll be able to bounce back soon and quickly put this behind him.”

Both Wilson Todd and Nathan Crawford had been the dominant riders of their respective 250cc classes yet were pitted head to head in the 125cc class and renewed their battle for the final time this year. […]

The garden hose just doesn’t cut it for washing bikes. […]