See what the SX1 riders have had to say in wake of another successful Australian Supercross Championship. 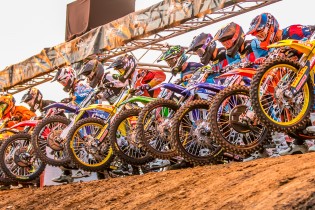 “Man, that wasn’t fun and at times it was almost unbearable (in the Final). Everything was on track early in the day and I felt good, but everything changed when I crashed in the Heat race, and what was my good shoulder popped out. It was a sharp, stabbing pain and it jolted through my whole body every time I jumped. Racesafe said I could get a needle to deaden the pain, but if it wasn’t precise, then there was a chance my whole shoulder and arm would go numb and that would make riding even harder, so I just had to deal with it. Despite the pain, it feels so good to win this Championship – and to think this was even possible just 12 months ago was crazy. Thank-you to everyone at CDR Yamaha for taking a chance on me at the start of the year, my family, friends and partner for their support and to the promoters of the Championship this year. Also, the team at Racesafe as they continue to do a great job in assisting the riders and keeping us safe. This Championship means a lot to me.”

“That was the longest, most painful 20 laps of my life (in the Final) The cut in my arm was deep, so just even gripping the handlebars was tough and the opening laps I was unsure if I would be able to hang on through some of the sections on the track. It’s a tough way to end the Championship but overall it’s been a good series for me and I’m happy to come second, as that’s the best I have finished in an Australian Supercross Championship. I felt I got better at each round and my riding improved from the start of the series. I want to give a special shout-out to RaceSafe for their work tonight. Simon and his team were able to keep me on track and as always, they do a great job. Thank-you also to my CDR Yamaha team and mechanic Mike Landman, and congratulations to Dan on a great series.”

“It was a great night for me, for sure. In the first Heat race, the track had been groomed up and was a little muddy and a lot of guys went down, including the CDR boys. So I knew I just had to get through the Final and put in 20 solid laps. I felt like I did that, in fact I felt the best I have for months with my riding, and when I got a lead in the Final, I just circulated and did steady laps and that got me the win. All the team at DPH Motorsports, Peter Stevens and Yamaha have made this all possible and I have to thank every one of them and all the sponsors. It’s been a great Championship and for me the last two weekends have been the best, racing with Cooper Webb and Chad Reed and making the podium with them the second day at the AUS-X Open was just awesome. It’s been such a great experience, and I am actually kind of bummed that the Championship has come to an end now, because I feel like I am just getting going! I wish there more races coming up.”

“I’m just so happy to be up on the podium tonight. I’m getting a little bit older than some of these guys, but the thing is, I still feel young and this year has been great with the SFC Yamaha team. The last two weekends I’ve had some good speed going and tonight in the Final I tried to stick with Boppo early on but he had so much pace going on that he totally deserves the win. I’m rapt with second and to finish fourth overall in the Championship is a great result for the SFC team and all our sponsors. It’s been great.”

“It’s been a hard couple of weeks since I lost my mum (Jennie, to cancer). It has been tough, so I was rapt when the Penrite Honda Racing team gave me the opportunity to race their 450 tonight. I really have to thank the team and all their sponsors so much for all they did for me this weekend. All day today I could feel my mum was with me, and even though ten laps into the Final I was feeling the strain, I knew mum was there and that’s what kept me going.”

In a solid display of support for the Supercross stars of tomorrow, the promoter of the two Queensland rounds of the 2015 Australian Supercross Championship has announced a massive cut in the event entry fee for Junior Lites and Mini Lites riders. […]

Weston Peick has issued an apology following his attack on Vince Friese. […]