With concern still surrounding the availability of James Stewart, fans have been given a huge boost ahead of this weekend’s event with the addition of Ricky Carmichael and Cooper Webb. 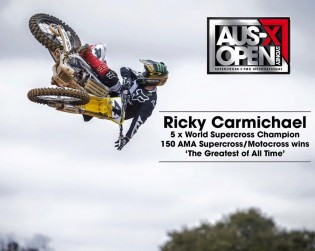 Ricky ‘The Goat’ Carmichael is the undisputed king of racing. Boasting a record 15 world titles the American gun has agreed to head to Australia a week early to participate in the event before continuing around the country with his Ricky Carmichael University (RCU) program.

Although not competing in the main supercross race, RC will line up head to head with long term arch rival Chad Reed. The special showcase will pit the riders against each other, one on one, marking their first battle on Australian soil.

“I’m pumped to be heading to Sydney to ride at the AUS-X Open in front of a packed out Aussie crowd, as well as alongside Australia’s greatest rider in Chad Reed,” stated Carmichael.

“The track looks insane and the fans are going to be in for an awesome show. It will be really cool to be apart of it across both days.”

“I’ll be trying to meet as many fans as possible on each night so make sure you head down and say G’day!”

In addition to this massive news, AUS-X Open organisers have also announced the signing of AMA superstar Cooper Webb. At just 19 years of age Webb has already won a number of international championships and is one of the top riders on the supercross scene.

“I’m pumped to be heading to Sydney this weekend to race against Chad and the rest of the Aussie riders, in what looks like an awesome stadium track setup,” exclaimed Webb.

“I’ve never travelled as far as Australia before so I’m looking forward to checking out the sights in Sydney, but more so putting on a huge show for the crowd and hopefully walking away with the winner’s trophy.

“It’s going to be hot in Sydney and the Aussie riders race hard, so expect some intense battles and bar banging this weekend!”

After turning pro in 2013 ,Webb  was crowned rookie of the year one year later before going on to dominate this year’s 250 West Coast Supercross Championship. He will be an exciting addition to an already packed SX1 field including Australian legend Reed and current series front runners Dan Reardon and Matt Moss.

With Saturday night’s event completely sold out a second replica event has been added for Sunday. Don’t miss your chance to see the GOAT go head to head with Chad Reed for the first time on home soil.

On behalf of Williams Event Management, the MX Nationals and the Wilson family, we would like to offer the following update on Dylan Wilson’s condition from Peter (Dylan’s father). […]