Hill Hauls to First 250SX Class Win of his Career 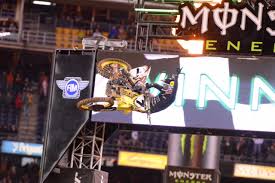 BTO Sports KTM’s Andrew Short led the field through turn one to start the 450SX Class Main Event to grab the Nuclear Cowboyz Holeshot Award®. Short was passed on the opening lap by Monster Energy Kawasaki’s Ryan Villopoto with Stewart in tow. Stewart then moved around Villopoto on the same lap.

At the end of the first lap, Discount Tire Racing/TwoTwo Motorsports’ Chad Reed pulled into third place. Reed was passed on Lap 7 by Red Bull KTM’s Ken Roczen. Out front, Villopoto pressured Stewart throughout the 20-lap Main Event but was never close enough to attempt a pass. It was the 46th-career victory for Stewart and his first since Atlanta last season, 15 races ago.

“It is always special to win, but especially this season,” said Stewart. “Tonight was our military-themed race and everyone here was one big family. This was an amazing race and I look forward to heading to Cowboys Stadium (in Arlington, Texas) next weekend.”

On the last lap of the race, Reed collided with Roczen’s rear tire and crashed while attempting to make a pass for third. As a result, Reed did not finish the race. Villopoto finished second, with Roczen in third.

Villopoto now holds a nine-point lead over Roczen in the 450SX Class standings.

On the second lap, Wilson crashed and dropped outside of the top 10. Just prior to the crash, Hill was able to pass Stewart for second and then assumed the lead. By Lap 6, Rockstar Energy Racing’s Jason Anderson, who came into the evening tied for the points lead, passed Stewart for second place. Hill led the remaining laps for the win, while Anderson finished second and Stewart finished third. Wilson re-entered the race to finish 21st.

“What an amazing feeling to get a win,” said Hill. “I had a lot more confidence after getting on the podium in Oakland and I was able to stay focused. I was so focused I missed the white flag, so when I got the checkered I kept charging thinking there was one more lap. This is just so awesome.”

KIRK GIBBS OUT FOR SX AND MXON

KTM Australia has conformed that Kirk Gibbs was injured in a crash during practice and will be out for the supercross season as well as the Motocross of Nations. […]

Shaun Simpson has won his second main event in a week to show blistering form heading into the MXGP season. […]

17 year old Victorian, Sam Martin, scored a podium result in his first MX National race on the factory supported GYTR Yamaha at the opening round of the 2012 Monster Energy MX Nationals at Conondale over the weekend. […]