The Chilean rider has extended his contract until the end of the 2018 season. 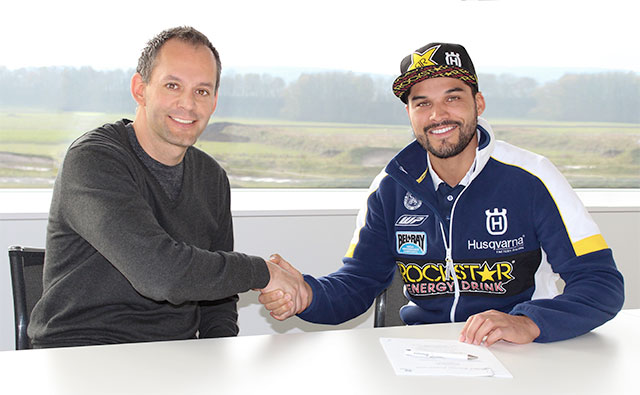 Pablo Quintanilla has had a very successful year for the Rockstar Energy Husqvarna Factory Racing team promoting a contract renewal for the next two seasons. The highlight was undoubtedly his crowning as the 2016 World Rally Champion following a number of standout performances.

“I’m very happy and proud to extend my agreement with Husqvarna Motorcycles into a long-term relationship,” Quintanilla said. “The brand is doing extremely well since it was re-launched, and it is very committed to rally sport. This allows me to concentrate on racing with the best team and the best bike available today. It is also a special privilege for me to race in the colours of a brand that represents so much history and heritage in motorsport offroad racing.”

Husqvarna Motorcycles Vice President of Motorsport, Robert Jonas is extremely excited about the extension and has high hopes of Quintanilla topping next year’s Dakar Rally.

“Pablo is one of the most talented young riders in the rally sport,” Jonas said. “His attitude and his skills are impressive, and we are glad to be working with him for the coming years. We both have one goal, which is to be on the top of the Dakar podium and we will focus our efforts in the future to achieve this result as soon as we can.”

Quintanilla will next front for the team on January 2nd as riders embark on the 2017 edition of the Dakar Rally, in Asuncion, Paraguay.

BIKE TEST: 2016 HUSQVARNA TC 125 Husky’s 125 has had an overhaul and we were let loose on it at the famous Budds Creek circuit in the USA STORY SHANE BOOTH/PHOTOGRAPHY HUSQVARNA I’m a 125cc […]

KTM has inked a deal with Alfredo Gomez to join Jonny Walker for the 2016 Extreme Enduro series. […]

Husqvarna Enduro Racing Team rider Lachy Stanford added the Husqvarna Sprint Series title to what has been his most successful season to date. Press Release Switching to his Husqvarna FE 250 in preparation for a […]