Competing in the Pro lites class and under hot and humid skies, Luke Styke and Luke Arbon have both positioned themselves well after the weekend’s racing. 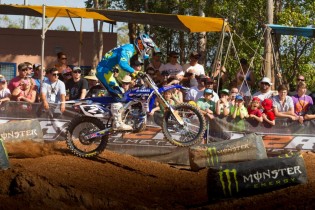 Round 1 – Saturday
Luke Styke picked up exactly where he left off in the MX Nationals, out front and leading. Styke grabbed the lead in the 11 lap main event and proceeded to hold a comfortable gap over his rivals in the early stages.

He was looking good and riding well until he tipped over in a tight turn and fell, handing the lead to US rival, Gavin Faith. He set off in pursuit of Faith but was unable to bridge the gap on the US import and was forced to settle for second place.

“It wasn’t the perfect race but despite the fall it’s nice to get round one out of the way and be on the podium. I just lost some traction as I went through the left hander over there but thankfully the bike didn’t stall and I was able to pick it up and get back in the race quickly.

“Second is a good way to start and things will improve from here,” Styke ends.

Luke Arbon made an impressive comeback to racing after sitting on the side lines of national competition for over a year. Arbon qualified well and was confident of a good showing, although nervous for his first event back.

He finished a rock solid fifth place in the main event and the track time will only do him good. He improved every time he hit the track and looks forward to continuing to make strides forward as the series progresses.

“Fifth is a good start to the championship,” Arbon explains. “I had done plenty of practice and training leading up to the race but nothing beats racing and the intensity it brings. It was good to get that one under my belt without too many mistakes and hopefully things will be a little smoother from here.”

Round 2 – Sunday
Competitors backed up for round two on Sunday and were prepared to again do battle with the heat and humidity as well as the other competitors.

Styke was out to reclaim the top step of the podium in the Pro Lites final and he did exactly that. He ripped the holeshot on his Yamaha YZ250F and put on an early race charge to get a three second gap on the rest of the field.

From then on he was able to monitor what was going on behind him and kept the margin the same for the entire race distance until the final couple of laps when he stretched it out a fraction more.

“No mistakes that time,” Styke said at the end of the race. “I focused on racing my own laps early in the race and just reeled them off. I knew my fitness would last in this heat and the last few laps I saw I had a nice lead and was able to relax a little to the finish.

“This is actually my first supercross race win, so it’s nice to get that done for me and the Serco Yamaha team.”

Like his team mate, Luke Arbon also gained a position at round two, claiming fourth in the main event. Arbon kept the pressure on for a podium spot the entire race as the top four broke away from the rest of the field. Arbon’s fourth was just what he needed and has him excited for the upcoming rounds.

“I felt better on the bike again today. I was more settled and flowed a lot better so it was good to make progress. I’m happy with fourth and hope I can keep improving as the championship goes on as I want to get on the podium and repay the Serco Yamaha team for giving me the opportunity for fill in while Luke Clout is out injured.”

Round three of the ASX now heads for Mt Gambier in South Australia on October 12. To follow the Serco Yamaha team on Facebook; www.facebook.com/sercoyamaha or on Instagram: @sercoyamaha

Cianciarulo Will Return for the Pro Motocross Championship

The Monster Energy/Pro Circuit/Kawasaki rider has recovered from a broken wrist and will line-up for the Hangtown opener. […]

The former team member will re join the squad in place of injured SX2 rider Wade Kirkland. […]