Monster Energy Kawasaki rider Adam Monea put in a consistent effort to claim overall honours in the MX1 class at round three of the 2014 Monster Energy MX Nationals.

Beautiful weather and a large crowd of spectators witnessed some fantastic racing in the Monster MX1 class, where the top three riders all finished the day on 60 points. However on a countback, it was Monea who claimed the round win (third and third from his two races) ahead of Team Motul Suzuki’ Matt Moss (second and fourth) and KTM Motocross Race Team’s Kirk Gibbs (first and sixth).

In the opening MX1 moto, it was a familiar sight with Jake Moss (National Pump Monster Energy Kawasaki) and Matt Moss both streaming to the front from the start gate. It was Jake who managed to take the holeshot, before being passed by brother Matt just a few corners later. However on the second lap, Jake Moss went over his bars at the back section of the track, pushing him down to 20th – he finished the race in 17th overall. CDR Yamaha rider Billy Mackenzie rode up into second place, before he lost control of his handlebars on lap seven and was forced back into seventh position. At that point the race settled down with Matt Moss leading the way from Monea, Gibbs and Kade Mosig (DPH Motorsport).

It was the first time that Moss had really looked challenged in 2014 when out in front, and the racing was tight for the next seven laps. That was when the action really heated up. On lap 15, Monea passed Moss to claim the lead, and two jumps later Gibbs passed Moss relegating the reigning champion to third spot. But just as Monea’s consistent riding looked like it would pay off, he crashed into a lapped rider and dropped back to third position – where he eventually finished. Gibbs held on to claim the race win from Moss, with Mosig finishing in fourth and Suzuki privateer Hayden Mellross claiming fifth.

While race one proved to be unpredictable, race two ended up being even moreso.

In the second moto, Mackenzie began the race on the pace taking out the holeshot, and control over the rest of the field. He shot clear of Matt Moss, Jake Moss, Cody Cooper (Penrite Honda Racing) and Rhys Carter (Team Motul Suzuki) and lead from start to finish to claim the race win. The surprise of the moto was witnessing the seeming invincibility of Matt Moss challenged, and the Suzuki leader drifted from second spot to fourth by the end of the race. He was passed by Jake Moss and Cooper on the third lap of the moto but could not peg them back – younger brother Jake finishing the race in second. In third place for the moto was Monea, who after a bad start found himself in ninth place and battling mid-field. But a tenacious effort from the Kawasaki rider saw him claw his way to third by the end of the 30-minute moto, doing enough to take the overall honours on the day.

In the overall championship standings, Matt Moss actually increased his championship lead from Gibbs to be 22 points clear, with Monea a further 14 points behind in third. 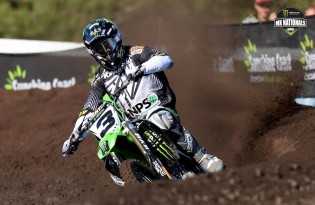 The new partnership will see Justin Carafa and Wil Ruprecht decked out by the brand. […]