Active8 Yamaha’s Josh Green battled through challenging conditions and picked himself up from some hard crashes at this weekend’s round seven and eight of the Yamaha Australian Off-Road Championship (AORC). 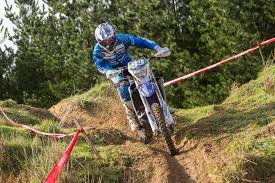 But Green, 22, from Soldier’s Point (NSW), still managed to finish second in the hotly contested Championship E2 Class and fourth Outright yesterday and third in class and fifth Outright today at the event, held at Coonawarra, South Australia.

“I made too many mistakes and had a few crashes,” Green said. “These mistakes cost me both days. But I will pick it up from here and learn.

“We’ve got some big races coming up now, and I’m confident I’ll be back on my game.

“We go straight into the Hattah Desert Race this weekend and then we leave for the four day.

“I finished second Outright in Hattah last year and I just finished my first ever Finke in third Outright, so I’m hoping for a strong result at Hattah this year.

“The four day is being held at Harvey, Western Australia, and from what I’ve heard it’s going to be fast and sandy, which will be awesome for me and the WR450F.

“I can’t wait to ride it. My best four day result so far was second in class and sixth Outright in 2009 at Orange.

“Last year I was third in class and fifth Outright on the WR450F for the Active8 Yamaha team.

“I have improved a lot since then and my season is going well… this year, I’ll be aiming for a win in my class and the Outright.”

Green’s teammate, Tom McCormack, also scored some solid results in class and in the Outright this weekend, finishing eighth Outright today and on the podium in the Championship E1 Class aboard his YZ250F.

The next race on the calendar for the Active8 Yamaha Yamalube Racing Team will be the 2013 Hattah Desert Race, being held in Victoria on July 6th and 7th.

They will then head to Harvey, Western Australia, for the 2013 Harvey Fresh Australian 4-Day Enduro (A4DE) being held from July 17th to 20th. For more info, please visit: http://2013a4de.com.au

For full results from the Yamaha AORC, please visit www.mylaps.com

Check out the team video: http://www.youtube.com/watch?v=s1e_9Xjzbjc

30/04/2012 Damien Ashenhurst NEWS Comments Off on PR: Yamaha Victorious at AORC Round Six

Seven of the Outright top-10 positions went to riders on Yamaha machines today at round six of the Yamaha Australian Off-Road Championship (AORC), held at Coonabarabran (NSW). […]

Team Honda have announced that “Crankt Protein” will be their naming rights partner heading into the 2016 racing season. […]